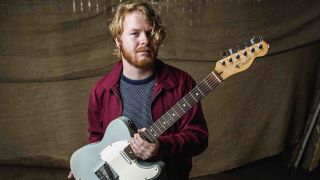 Fans of UK instrumental rock have been wise to Alpha Male Tea Party for some time now, and blinding sets at alternative mecca ArcTanGent Festival have cemented their position among the post-rock pantheon, but with their signing to Big Scary Monsters for forthcoming opus Health, the Liverpool trio look set to take their sound further afield - well, as far afield as riff-heavy instrumental rock can go, anyway.

Six-string wizard and effects addict Tom Peters is the man with the plan behind Health, and it’s one heck of a blueprint: the most refined and biggest-sounding AMTP record yet, harnessing all the band’s spasmodic melodic craft and natty finger-twisting riffs to build an all-encompassing instrumental colossus.

Here, the guitarist lets us in on the inspiration behind his furious hammer-ons, burlesque support acts and why he wouldn’t even bother playing a gig without effects pedals…

“It was a dead-old Marlin super-Strat thing, ‘80s, I think. It was red and had a headstock that could take your eye out. I got it when I was about nine and couldn't play it.”

“My 2004 Daphne Blue Fender Highway One Telecaster. It's my favourite guitar and I love it and cherish it like a family member. I bought it when I was 15 and it will be with me forever.”

“Hmm, well, I guess really all of them. The average Alpha Male Tea Party set is pretty FX-heavy but if I really had to pick, my Paul Cochrane Tim Overdrive is pretty indispensable. But if someone said 'you can only use one pedal at this gig' I'd probably just go to the pub instead.”

“I had a Gretsch lap steel for a while. Completely pointless for this band, but I sold it because I decided I wanted money instead. It was just a nice thing. I tend to hang on to things, really; I've only ever sold two proper guitars, and that was after several years of not being sure whether I should.”

“Erm, I'm terrible at practising but when I do, I usually just play through our albums from start to finish. Either that or I sit there noodling for ages; it's very unfocused, really. I guess the last time I properly went through things was last week.”

“Yeah: I'm not the fastest player. My right hand is slower than I'd like it to be, so I've never really been much of a shredder. In a way, it's cool because I've made up for it by being pretty good at hammering on and sliding and that sort of thing. Also, I wish I was a little bit cleaner; I ping weird harmonics and I'm not totally accurate all the time. Perhaps some more focused practicing would help?”

“Good question. Prince, because it would be ludicrous, and I imagine he would shout at me.”

“Does the desert island have power sockets? I'd probably take my Telecaster because I could still write some riffs, and an amp without a guitar is entirely pointless.”

“I once played a gig where my switcher pedal stopped sending MIDI so couldn't change any patches on my MIDI pedals, which included all my drive tones. I had to turn my amps up to full to get them to break up, and it was horrible ’cause it just didn't sound like AMTP at all, and I had no clean sounds.

“Then there was the time we had just set up to play and got told a burlesque dancer was going to come on and do a dance before our set, so we had to move everything out the way again so she could. When it was our turn, the FOH guy didn't put any music on and left all the mics live, so we were struggling to drag everything back into place in a huge, silent room where everyone could hear us grunting and struggling. Quite tame, really.”

“Everything is fine, get a haircut and stop doing battle of the bands competitions in Burnley. Also, guitar solos are terrible: stop it.”

Health is out on 23 June via Big Scary Monsters. Alpha Male Tea Party play the following tour dates this year: