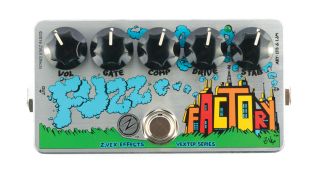 Z.Vex Effects is perhaps the original weirdo boutique pedal maker, and their reputation can be traced back almost entirely to this one appropriately eccentric fuzz pedal.

Germanium transistors are noisy, sensitive to heat, and often more unstable than silicon transistors if biased wrong, so in a very real sense the Fuzz Factory is at times more like an experimental breadboard jammed into a pedal than a clinical tone machine, and that’s part of the appeal.

Unlike a tight, refined distortion pedal, the Fuzz Factory looks to create inspiration from serendipity, from noises, squeaks and oscillation, and it’s remained enduringly popular with players ever since its introduction.

For an idea of the wide range of tones on offer, listen to early Muse records - it’s all over Origin Of Symmetry, from the fuzzy squealing at the beginning of Plug In Baby to the glitchy stabs of fuzz guitar in the verses of New Born.

Matt Bellamy ultimately would have several built into guitars, and would use another Z.Vex creation, the RF-field powered Wah Probe, to play a wah solo with his hand live. Another prolific user is Annie Clark, or St. Vincent; again, you can hear the unmistakable squeak and hum of the Fuzz Factory all over her intricate riffs.

Explore the best fuzz pedals you can buy right now
We’ve rounded up some of the very best fuzz pedals for guitarists, which run the gamut of tonal options for your pedalboard. Ready to get fuzzed up?

The volume control is nothing but a passive control - it sits at the end of the circuit and dumps signal to ground.

This control biases the third and final transistor in the circuit. Together with the ‘Drive’ control, it has a large effect on the tone of the pedal when used on more sensible settings.

This control is where the circuit is visibly closest to the Fuzz Face, as this has pretty much the same effect as the ‘Fuzz’ control on the Fuzz Face - controlling the amount of gain delivered from the second germanium transistor, up to its maximum gain. Because of where it is within the circuit, it is highly interactive with the ‘Comp’ control.

Some would say that, at least in the early days, Zachary Vex’s talent was as much marketing as engineering, and this control’s name is fine evidence for that. Although it’s named ‘gate’, it actually rebiases the first germanium transistor, the second gain stage in the pedal, resulting in sputtering guitar signal and glitchy cut-outs when the transistor is biased ‘wrong’ - but who reads the datasheets, anyway?

Z.Vex’s Wah Probe combines a wah pedal with a proximity-sensing radio transmitter so it can be used without a treadle, by feet or hands. Of course, after creating the Wah Probe, the logical next step was to combine this idea with a Fuzz Factory... On the Fuzz Probe, the antenna controls the stab control, and it can be used to destabilise the guitar tone and create oscillation.

The transistors that power the Fuzz Factory 7, named for its 7 rotary controls, are set into a little window and backlit, so that you can properly appreciate them as you rip. In addition to the normal Fuzz Factory controls, there’s a treble roll-off tone knob, which is accessible via footswitch, and a nine-position rotary switch that changes the capacitor in circuit between the first and second gain stages, altering the EQ.

The Zoom Ultra Fuzz is an interesting beast, with a tone that recalls both the Fuzz Factory and the op-amp version of the EHX Big Muff, which makes sense, as it’s built around op-amps rather than germanium transistors. It also boasts a feedback circuit that allows for Fuzz Factory-style oscillation and noises, all within a bombproof enclosure. It’s now discontinued and fairly scarce on the second hand market.

Get the tone #1: Fuzz Face vibe

This setting is proof that the pedal isn’t all crazy, all the time - try this for a classic Fuzz Face tone, that’s highly responsive to rolling off the volume at the guitar end. To add a bit of a twist to the blues sound you know and love, you can start pulling back the stab control to cause oscillation.

The Fuzz Factory is highly interactive with the guitar, if the pedal is first in your chain and not behind a buffer, so you might need to tweak the gate and stab a bit depending on pedal position and the pickups you use, but this should get you in the ballpark of the lead tone from Plug In Baby.

Splatty, or ‘velcro’ fuzzes didn’t start with the Fuzz Factory, but it’s probably the most famously abrasive. Boutique builders like Death By Audio have made a career out of velcro-like sonic destruction, so get in on the action with this sound. To mangle your tone further, try turning the Gate control clockwise.