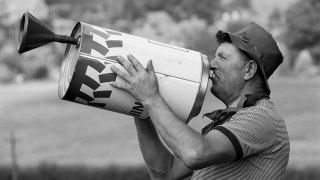 If you're feeling stuck in a rut when it comes to producing original and unique sounds, it may well be time to start thinking outside the box.

With this collection of unorthodox sampling and synthesis tips and techniques, we'll get you back on track - even if it is the non-stop track to crazyville.

Take a ‘distortion synthesis’ approach to extremes by sculpting entirely new tones and timbres using only simple sounds and distortion. For example, push a pure sine wave into a distortion stage to square off the waveform, then vary the input gain with volume modulation (ie, tremolo) to create wavering waveform shifts.

Sometimes it’s the sounds made by mistake that really inspire - so create hardware malfunctions on purpose!

Plug a cable into the wrong port to generate buzz or hum; crank up an empty mixer channel’s preamp gain to capture the amplified system noise; or pull a turntable’s needle off the record for scratches and pops. Record them all and use them in your sound design adventures!

Some of the best dance music basslines feature lip-curling pitchbends that add that special something - but drawing in specific bends via MIDI can be tedious. Instead, try and incorporate these movements at the sound design stage - create a cool bass patch in a synth, assign an LFO to global pitch, then print a bunch of live tweaks to audio as you alter the LFO’s speed.

Once recorded, chop up and save out the various sections, then throw them into a track at the composition stage to inspire clever bends and twists.

Music production advice often involves sweeping statements such as “watch your gain staging between plugins”, “Less is more”, and, “You can’t polish a…”. Well, although these statements are founded in truth, the most important quote of all is: “Rules are there to be broken”!

When you’re stuck for sound design inspiration, try breaking the rules! Overload plugins, stack up dozens of devices, and make it your mission to transform awful recordings into sonic gold.

Make music with your ears, not your eyes, right? Wrong! Fire up a synth’s initialised patch, turn off your speakers, then create an entire synth patch without listening to it!

You can plan how it will sound by choosing waveforms by eye, or go crazy and hook up random parameters. It’s worth a try if you’re completely stuck for inspiration!

7. Stick to one synth patch

Modern ‘power synths’ such as Xfer Records Serum and Spectrasonics Omnisphere 2 give you a flabbergasting amount of synthesis options. A good way to make use of all this potential is to try and create an entire drum groove - or even an entire track! - within the same synth patch.

For example, use Serum’s four LFOs as separate step sequencers to design an entire beat loop. Use a tight quarter-note LFO spike to trigger both volume and pitch modulation over Osc A’s sine wave for a kick; trigger the Noise oscillator with a rhythmic LFO 2 pattern for an intricate hi-hat groove; drop in a clap/snare on the 2 and 4 via Osc B and LFO 3; and use LFO 4 to create a simple bass via the sub oscillator.