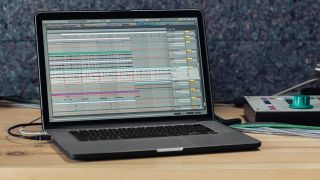 Track arrangement can be a hugely rewarding process, but when the ideas just refuse to come, you can be left frustrated and disheartened.

Don't give up, though! The next time your muse leaves the studio, turn to our easily digestible half dozen creativity-awakening tips and get your head back in the game…

1. Start in the middle

We all arrange tracks in different ways: some like to begin at the first drop and flesh out the surrounding sections once the meat of the track is in place, while others lay down the intro first, before naturally building the track up as the listener would hear it.

These methods can leave you stuck for ideas, however - so try the unorthodox approach of starting a track at the second breakdown. At this specific point, you can freely introduce parts and assume the listener has already heard them before, meaning you can go truly wild with automation and change - it’s much easier to then work backwards and fill out earlier sections by subduing the elements from the second break. Plus, you know this section is probably going to build to the most important climax of the track, so you can focus solely on ramping up the tension without having to hold back.

An often-cited arrangement technique is to import a commercial track you like into your arrange page, so you can copy its structure as a guide for your own arrangement.

One absolutely unintuitive but nonetheless effective way to turn this method on its head is to start with a track you like, but then use its arrangement as a template for what not to do! Has the artist’s track got a long, drawn-out, progressive style? Then make your arrangement short and snappy! You get the idea…

We’re always told to use our ears at all stages of the production process… so go against the grain and create a rough arrangement without listening to what you’re doing!

Try crazy techniques such as throwing samples straight onto the arrange page, loading synth presets and automating parameters, and laying out all your parts on the timeline before blindly deleting sections, without even listening through the track. Once you’ve chucked a bunch of ideas down, listen through and see if you’ve come up with something you wouldn’t normally have thought of.

To arrange music naturally and spontaneously, you need to be able to tap into the creative part of your brain at the right time. Don’t try and lay out a track after you’ve spent several hours building up an eight-bar loop, as you’ll have already spent a lot of your brainpower generating the ideas. Instead, stay up late creating your stacks of parts; sleep on the idea, to let it simmer away in your subconscious; then wake up first thing in the morning and arrange it quickly
while you’re still sleepy, to tap into that fuzzy brain state and ignite the creative spark.

There’s something about putting pen to paper that’s proven to get the creative juices going, as it helps you impress an idea more firmly into your creative subconscious. So, instead of slogging away in your DAW as usual, bust out a notepad and draw a visual plan of your arrangement. Not only will this help solidify your arrangement gameplan, but it’ll also set you up with a handy guide to refer back to if you get stuck.

6. Use a dodgy acapella

We all have endless acapellas filling up our hard drives - many of which are bad quality, downright cheesy, or both. It might sound silly, but why not make use of one purely as an arrangement guide? Use a terrible acapella as the basis of a song’s arrangement and structure, make a track around it, then delete it!