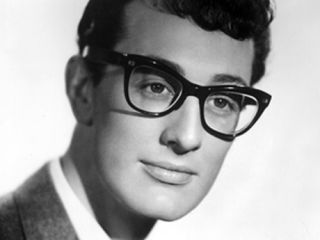 Another trip back through time and the pages of GT. This time we look back at the world of guitars, music and international events in the late '50s...

Vega produces the 1200 guitar, a stereo model that sports twelve individual pickups grouped into two blocks of six with huge individual round pole pieces set in a diagonal configuration. The look of this hollowbody guitar is dominated by the pickups and the poor choice of two gold sparkle scratchplates.

A plane crash kills Ritchie Valens, The Big Bopper and Buddy Holly; Guitar Slim dies as does Billie Holliday; but it's a good year for births. Bryan Adams, Susanna Hoffs (The Bangles), guitarists Richie Sambora, Brian Setzer and Steve Stevens and singers Robert Smith, Morrissey and Suzanne Vega. Meanwhile Elvis is still in the US Army.

Dense fog brings chaos to Britain; the Mini is launched onto the UK market as 'the people's car' and costs £500; the first section of the M1 is officially opened between Watford and Rugby; the Mermaid Theatre opens in London; postcodes are introduced; import tariffs are lifted; Juke Box Jury debuts on BBC TV; and Goldfinger is the new James Bond novel from Ian Fleming.

Fidel Castro leads a revolution in Cuba and overthrows the dictatorship of Fulgencio Batista; Alaska becomes the 49th US state; the Saint Lawrence Seaway is opened; and a rare occultation of Venus and the star Regulus gives astrophysicists the chance to determine the diameter of Venus and its atmospheric structure. The event will next occur in 2044.

Cliff Richard and The Drifters are big business as the live debut album Cliff is produced, and Living Doll climbs tothe top of the charts, with Hank B Marvin using a borrowed semi-acoustic guitar for the session. Marty Robbins is in El Paso, Ritchie Valens sings of La Bamba and Buddy Holly says It Doesn't Matter Anymore.

Selmer imports the Resonet Grazioso guitar from Czechoslovakia, changing the name to Futurama. Inspired by the Fender Stratocaster, this was the nearest thing available in the UK with a solid body, maple or rosewood board, three single-coil pickups and a curious switch block. And at 55 guineas it was affordable to the young George Harrison.

Harmony introduces the Stratotone Jupiter H49 with a spruce top, chambered body, pair of DeArmond Golden Tone pickups and a blender control. Its Les Paul inspiration is undeniable as is also the case with the new Framus Hollywood 5/132. Available with one, two or three pickups, this solidbody guitar is a new venture for the company.