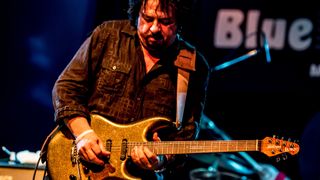 A minute with a great guitarist is all you need to see what makes them tick. We grabbed Toto main man Steve Lukather to give the 'A's to our 'Q's.

"At the time (1964), probably any Beatle related guitar. But the Les Paul caught my eye pretty early on then a Strat - Jimi and all.

"Actually I wanted any really good electric guitar, as I had some amateur 'drug store' guitars that were really hard to play and get a sound on."

What was your best gig?

"Wow! There have been so many great experiences in my it's life hard to pick just one. It would be finding myself in the same room as all my childhood heroes over the years, as a session player or playing live out in the world. I didn't answer the question did I? Haha!"

"I have many. Gear not working on a live show - that is rough. I have gone to a very simple pedal board and a cable right in to the amp to lessen the possibilities of this happening.

"Being out of tune sucks. Guitars do go out of tune for many reasons, as we all know and it's a drag live when things slip or a string breaks. I wish I had perfect pitch but I don't, and thanks to the miracle of YouTube a bad night lives forever!"

"Stop judging myself too harshly. It keeps one from going for it and finding some magic. If I hit a wrong note or over-bend in the heat of the moment; or play too much cause it just felt good at the time, unfortunately we live in this new world where everyone has a camera on you at all times and the 'muso-jury' has their way with you on the Internet...

"Gotta really have thick skin these days and a great sense of humour about yourself. It has taken me a few years to get that. Haha!"

"Every day - unless I am travelling. I love with the guitar more than ever and I am so lucky to do this for a living. And now that I am clear in my mind and body I can find things I could not before. Refining things. I just love to play."

"I play my Yamaha acoustic, play slow stuff and work up to speed - very quiet, just letting the hands warm up so when I get to the electric it feels loose. I do vocal warm-ups too - it's a whole ritual.

If you could put together a fantasy band with you in it, who would the other players be (dead or alive)?

"Man you keep asking me stuff I have lived! It depends on what kind of music it is. As a session player for so many years I have found myself in rooms looking around going, 'Is this for real?'

"But I will say touring with Ringo this summer was a dream come true with such amazing players - and it's Ringo! Best summer vacation in my life! I would have loved an hour with Jimi though!"

Present company excepted, who's the greatest guitarist that's ever lived?

"No such thing - too many to even start. These 'Top 100 of all time' polls are really just made to piss people off and they differ so much depending on the musical slant of the magazine.

"I have my faves, but it is humbling how many great players there have been and how many there are now!"

"All Along The Watchtower by Jimi is about as perfect as it gets in every way, but I could sit here and write all day with other examples."

What's the solo or song of your own that you're most proud of?

"I know it's cliché but a song on my new record called Judgement Day has a lot of melody and not obvious stuff - not over flash either."

"Being a nice guy, a great Dad and a decent guitar player with a wicked sense of humour."