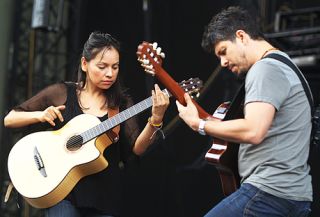 Rodrigo Y Gabriela's new live album Live In France will be released via Rubyworks on 25 July and will be reviewed in a future issue of Guitarist magazine.

The duo are appearing throughout Europe during the Summer, and here are the dates so far, including two in Blighty and one in Ireland.

Checkout this live performance of Hanuman from last year and if you think you have a more fiery rhythm technique than Gabs, you'd be wrong...muy awesome!