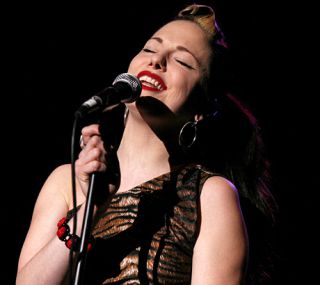 Watch the official video for the title track of the genial Irish singer's new album.

Imelda May, who's band features the indomitable Darrel Higham on guitar, releases her new album Mayhem on 4th October via Decca Records.

This album is made up of a fusion of surf guitars, blues and rockabilly, but with an edge that comes from some even more eclectic influences. The first single Psycho channels the spirit of early PJ Harvey, whilst the heartbreakingly poignant Kentish Town Waltz conjures an image of Chrissie Hynde at her most reflective. Mayhem, the upcoming single, is a rockabilly whirlwind that showcases Imelda's bluesy vocals and rootsy sound.

Imelda says of her new album:

"I'm over the moon with how Mayhem has turned out - I hope people enjoy it. I feel I've made the album I wanted that reflects the spectrum of all my influences from music past but is a record firmly in the here and now".

Darrel Higham is hosting a video techniques column entitled Rock 'N Roll Stylings on the Guitarist CD, and the new issue, which goes on-sale 29th September, features techniques on how to get the most from your Bigsby vibrato.