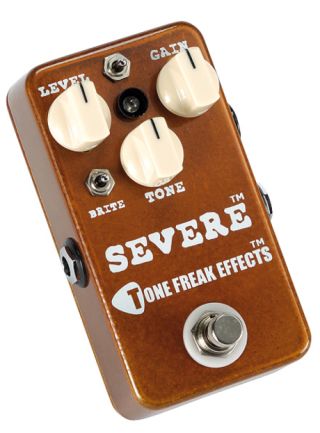 A severely good distortion from the Californian firm by Dave Durban

In issue 322, we awarded Tone Freak's Abunai 2 overdrive our Guitarist Choice award. So impressed were we that we had to have first dibs on its latest distortion, the Severe. The bronze-finished, hand-built pedal is Tone Freak's answer for heavy distortion, but actually offers a whole spectrum of gain tones.

The Severe has a three-way toggle switch that offers asymmetrical, symmetrical and no-clipping options. There's also a three-way 'brite' switch that dictates the level of brightness available from the tone control — especially useful for those with varying amp set-ups. Additionally there are level and gain controls, plus a bright blue on/off LED. Power is via a single 9V battery or a 2.1mm centre negative pin power adaptor (not included).

With the gain control creeping over halfway, the Severe delivers a tight, musical distortion that will set sparks flying for heavy rock and metal players alike. It possesses a sweet American overdrive core, and cuts like a muscular British amp on 11, which sets the scene for incredible metal rhythm versatility and brooding Van Halen-style soloing. There's no flubbing-out in the low end or definition loss with lower tunings. But attenuate the gain and we get one of the most musical American-indie overdrive tones around.

A distortion that offers players of a heavier persuasion an all-encompassing and musical option for their rhythm and lead styles. Try one!