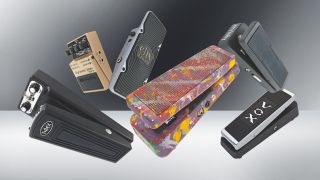 Change tone in an instant, make your guitar sound as if it's crying, and funk up those rhythm sounds - welcome to the wonderful world of wah-wah.

What does a wah pedal do?

In basic terms, it changes the tone of your signal. As you push the pedal downward from its highest position, it changes your tone from bassy to trebly, but it's not like a linear tone control; there's more going on than that.

In technical terms, it's a bandpass filter with a resonant peak at its low-pass roll-off frequency. What the pedal treadle enables you to do is to move the frequency of the resonant peak up and down, offering the well-known wah effect that's been compared to the human voice or a trumpet played with a mute.

You can use a wah as an expressive effect when playing lead, but there's also the 'wacka-wacka' funk rhythm sound that's probably best known from the intro of Isaac Hayes' Theme From Shaft.

Another use is that of the 'cocked' wah, where you set the treadle in a static position to emphasise a certain tonal frequency.

What other features might I find on a wah?

Some pedals are as basic as it comes, with no tweakable controls and an on/off footswitch located under the front end of the treadle, so you engage the effect when you press down hard on it.

Other pedals are available that keep the footswitch separate from the treadle, and you can also find wah pedals with multiple voicing options. There may also be options to adjust the stiffness of the treadle action, typically using an Allen key.

How is it all done?

The traditional wah design features a physical connection whereby the treadle engages (usually via a toothed mechanism) with the shaft of a potentiometer, although other pedals eschew the physical coupling for an optical method, so there's no potentiometer to wear out.

While there are several kinds of wah circuits, the original circuit design featuring an inductor is favoured by tone aficionados who believe that the inductor in vintage pedals is key to their smooth vocal quality.

There are various opinions expressed about the merits of the Halo, Fasel and other inductors.

I'd rather be concentrating on my fingers than my feet...

Fair enough. It can take quite a lot of co-ordination getting your foot movements to work with your hands, perhaps even more so if you're playing a rhythm part - so sometimes, an auto-wah might be more what you need.

These usually generate a wah effect triggered by playing dynamics, although some can work to a set speed.

Check out some of the best wah pedals we've reviewed below...