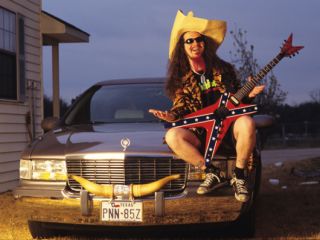 A previously unreleased track featuring the guitar talents of Dimebag Darrell, titled 'Dawn Of The Horrible Gorilla', has surfaced online. Click the link below to hear the stream.

Sean Yseult, best known for her role as bass player in White Zombie, is currently hosting the track on her Soundcloud page and has also posted the following note by way of explanation:

"Dimebag Darrell, Sean Yseult and Philip Anselmo created this absurdity at 6am after a long night of drinking on a Pantera/White Zombie Tour in '92.

"Recorded on Darrell's 4-Track in his hotel room, the song was made up on the spot with Darrell on guitar (and drum machine) Sean on bass, and Phil singing. This comes from a cassette from Sean Yseult's archives, never heard before!"

So far the reaction from fans to the leftfield track has been something of a mixed bag. One fan described itas "quirky and hilarious", whereas another simply asked "what the f**k is this?!"