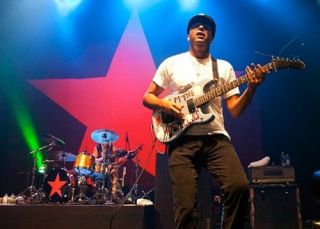 Tom Morello is an expert when it comes to riff-writing. When we interviewed him for our Monster Riffs issue of Total Guitar - on sale now - he had so much to say on the subject that we had to leave some stuff out. Well, here are those extra words of wisdom for you to read now...

TG: Do you have any influences, when it comes to writing, that are outside of music

"Some of my main influences as a guitarist are completely non-musical, on both the high-brow and low-brow of the section. On the low-brow level, just being open to the noises of your environment can help. There was a time when I would be practicing hours and hours a day trying to approximate, err, the noise that hippopotamus makes (after a trip to the zoo), or the sound a vacuum cleaner made, or a police helicopter going overhead. That kind of mimicry came from recognising that the electric guitar is a relatively new instrument on the face of the earth and there are no rules about how and when and where it should be played."

And what about the 'high-brow', as you call it?

"On the opposite end of the intellectual spectrum, with regards to guitar playing, some of my main influences on guitar were from the world of politics and even sports. Whether it was someone like Malcolm X, or Muhammad Ali, or even the great American racehorse Secretariat. I take those as influences because they didn't just think outside the box of previous ideas or accomplishments in their milieu; they redefined what it was they were doing. Whether it was Malcolm X who redefined black politics, or Mohammad Ali who came up with a new way to fight fights with attitude and panache, or Secretariat whose skills seemed supernatural.Trying to tap into and use as a North Star, or guiding light, people or even animals who excelled at their profession, it helps you look at your own profession in a different way. There are things possible on the guitar that no one has thought of yet - and I'm looking for them."

"At this point, it's certainly not conscious. I started playing late - I started playing when I was 17 years-old - and spent years catching up, gaining technical proficiency. Practicing eight hours a day for years - at that point I was merely honing my technical skills as a musician. I was not an artist. I could copy Randy Rhoads solos, but I certainly wasn't writing anything as exciting or brilliant.Then there was a certain point when I sort of abandoned the 'practice by ropes' and focussed most of my attention on the eccentricities of my own playing and that's when I had the real break-through and then it was less about, 'OK, in order to write a good riff I must incorporate vibrato or hammer-on's and I broke through that technical barrier. It sounds kind of cliché, but just feeling the music coarse through me… It's like you fight really, really hard to get your antenna high enough, that you might pull down some ideas from the ether and then, and then once they start coming you just accept them for what they are and the thought about specific techniques doesn't play a big part anymore."

Riff-writing is a band affair

TG: In our reader-voted 50 Greatest Guitar Riffs poll RATM was voted in at No.39 for 'Renegades Of Funk', but one of our favourite Rage riffs is 'Wake Up'. How did that riff come about?

"I can remember the room that song was written in. That song was very much a collaborative effort. The big riff in that (the bam-ba-ba-ba-baaaa one), I believe that was Timmy [Commerford, bassist]. At the time, he was a big fan of Helmet and that might have been an influence. I remember the day we wrote that song and everybody was pitching in their two cents. Sometimes we would come in with a fully-formed idea, but that one was very much a collaborative effort. At that time we had nothing to lose, we weren't trying to get a record deal, you know? That song is like seven and a half minutes long without a chorus! And it worked! We weren't writing for the radio with that one."