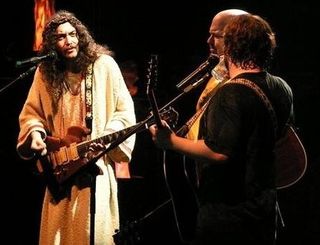 John sees the guitar as a religious calling...

Total Guitar is proud to unveil the first in a new series of guest blogs from Tenacious D guitarist John Konesky.


John's going to be regaling us with various war-stories, guitar-tales and tips for aspiring pros, not to mention keeping us up-to-date on the progress of the new album from the almighty Tenacious D. Here's his first instalment.

When I was about 16 years old, I very distinctly remember tuning into HBO, way too late on a school night, to find one of the most hilariously absurd and wonderfully satisfying shows I'd ever seen on TV. This wasn't comedy like I'd seen on prime-time. How could something be so smart, yet completely asinine? Sometimes it's parody, but really it's one-of-a-kind. You could say it's satire, but something this special, even though it's joking, needs to be taken seriously, and appreciated for the history it just made right in front of your melted face. I'm referring of course to two of the most unlikely rock gods the world will ever know... Jack Black and Kyle Gass - otherwise known as Tenacious D.

I am now very fortunate to call them my friends, as well as my superiors, even though that's not really how they reign.

In my early 20s I had a fortuitous meeting with KG, after a Tenacious D show, outside of a bar called Ruby Tuesday's in Columbus, Ohio. That meeting spawned a friendship based on our mutual love of the guitar, and any genre that has a tendency to feature it. When he returned to Columbus with JR Reed or "Lee" to seek out players for their side-project Trainwreck, he contacted a mutual friend of ours to inquire about members of my band to back them up. They weren't seeking an electric guitarist at that time, so I offered my services as guitar tech. Soon after getting the opportunity to show him some chord melody arrangements I'd been working on, he offered me the gig in Trainwreck as lead electric guitarist [under the awesome pseudonym John Bartholomew Shredman - Rock Names Ed]. I relocated to Los Angeles and have been playing with him ever since.

A few years later, the opportunity arose to play for the D on 'The Pick of Destiny' record, and later, the corresponding tour. At that point I'd gotten more than a few chances to share the stage with Jack (he'd been known to make guest appearances with Trainwreck in the past), and of course I had a strong rapport with Kyle by now, so I was lucky enough to be their first choice for the gig.

So now that introductions are out of the way, I'd like to briefly say how excited I am to be sharing this time with you. The guitar has consumed over two thirds of my life. It's all I've ever known, and the only thing I can rely on every day to make me feel like I have something to contribute to this world. My greatest moments and achievements were while I was holding this object that in 500 years may be obsolete, or possibly even forgotten. I'd also like to stress, that what I got out of the guitar 10 years ago, and what I get out of it now, are identical. It doesn't matter if you're performing for just yourself, or a sea of people, it's all the same.

I hope to leave you with valuable insight into the making of a Tenacious D record, as it starts to shape up in the coming months. In addition, I hope to impart some advice to anyone who may want to consider the guitar as their career, but most importantly I want to show you first-hand just how awesome it is to work with the greatest band in the world...Tenacious D!