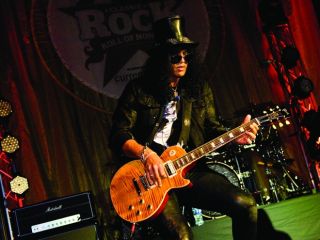 The promotional machine surrounding Slash's second solo album 'Apocalyptic Love' (due 22 May) is warming up as the guitarist announces plans to present six shows on Radio 2 this April.

Slash revealed his plans via Twitter stating, "Just finished recording a six show radio series for Radio 2, full of hard rock & metal that was a major influence on me. Blistering!"

It won't be the guitarist's first appearance on BBC Radio, back in December 2010 he presented a two hour show on 6Music, in which he played tunes from the likes of KISS, Queen and The Rolling Stones.

Speaking of the latter, Slash will also be dropping in on Ronnie Wood's radio show this week, revealing (again via Twitter) that he was looking forward to getting the opportunity to "Shoot the shit & play some riffs".

Episode 87 of The Ronnie Wood Show, featuring Slash, will air this Friday (9 March) on Absolute Classic Rock Radio 7.00pm to 8.00pm. Dates for Slash's own show are yet to be revealed.