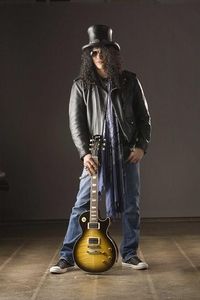 Wood told his fans: "I remember him as a kid spying on me when I was playing guitar and I'd teach him little licks, and now I'm learning licks off him, it's really good."

"He's a great guy to play with and he's a great at interacting, a good weaver, you know, we can weave, like me and Bobby Womack do and me and Keith Richards do. Slash is such a great talent, and he plays in my solo band when I take it out, and he's on my new album as well."

Slash's mum was a costume designer to the stars (including stage-wear innovator David Bowie) and his dad designed sleeves for rock albums, so the young guitarist grew up around rock royalty. We bet that top-hat looked huge on him back then.

Check out Ronnie Wood's first radio show on the stream below. It's essential listening for guitarists - Wood takes his axes to the studio and noodles along to the tunes!