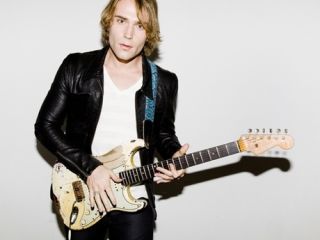 Welsh-born Canadian blues guitarist Philip Sayce is heading to the UK for a string of tour dates beginning next week (7 November, dates below). TG caught up with the inventive six-stringer to find out what we can expect from the live shows and how a professional guitarist prepares for a stint on the road.

How have you prepared yourself for this tour?
"I just finished rehearsing for the tour this week with my band, I'm always playing, reaching, pushing, so I try to keep it tight year round. I've also been working out, physically, a great deal. I'm working with a wonderful trainer and she's been whippin' me into shape! Also lots of jogging and hiking in Temescal Canyon here in Los Angeles. I've just got a new haircut, I definitely need some fresh socks for this tour and maybe a new toothbrush... Oh yes and I just hired a new manager."

What gear will you be using live?
"My main guitars are Fender Stratocasters, my amps are all modified or built by Tommy Cougar in Sweden, except for my Fender Vibratone which I just had modified by Peter Van Weelden in Holland. In terms of pedals, I like old Fuzz Faces, old Tubescreamers and wah wahs. I'll have my vintage Echoplex too."

How did you get your touring band together?
"Joel Gottschalk came in one day to audition for the band. I had met him briefly when he came out to see me play and check out the scene one night. I had no idea he was going to be this power plant of energy, kick ass bass player! He came in and destroyed the audition in a way I've never before seen and we've been band-mates and good friends ever since. Joining us on this tour on drums is our good friend Fritz Lewak. I worked with Fritz in Melissa Etheridge's band and he's a long time member of Jackson Browne's band. He is one bad ass drummer and he's raised the bar around here for sure."

Set them up, knock them down

Tell us about a few tracks that will be included in your set list…
"It will be a mix of songs from my two albums with a few surprise tracks here and there. 'Changes' will be great because Fritz will be going off like fireworks. 'Little Miss America' is fun, because it's the kind of song we could end up going in any direction depending on the night. No two shows will be the same. Every night we'll be playing from deep inside, I promise you that."

How do you think your new material, from your album 'Innerevolution' (released in May), will be received on this tour?
"Hopefully with loud and enthusiastic roars, applause and all around pandemonium!! I hope that the music resonates within people and really encourages them to feel things for awhile. Then they translate that into their own lives and do something they really love to do."

You're a huge blues fan, with some of your influences listed as B.B. King, Stevie Ray Vaughan and Jeff Healey. Will you be playing any blues covers as part of your live set?
"Every note I play has the inspiration of those great artists, so in that way yes. We change it up most nights, so we'll be visiting some of our favourite songs by other artists out of respect.I want to do my part and continue their message and example, and create real music. It's not about copying, but rather continuing to stay true and connected to my art through my own personal experiences."

Finally, Marcus Bonfanti is a special guest for this tour. Will you be playing any songs together on stage?
"I look forward to meeting Marcus. He's a great talent and we're thrilled he's joining us. I always love to jam so, who knows..."