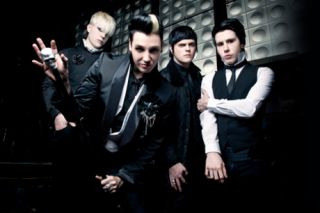 My Passion guitarists John Be and Jonathan Gaskin have a major crush on nu metal and cite Wes Borland, along with guitar wonder Matt Bellamy, among their favourite riff-writers. Here they tell TG how tone can influence your riff writing, and how dynamics are the key to a heavy riff… Interview: Matt Parker

Nu metal was a melting pot for great riffs

TG: How would you define a guitar riff?

John Be: "A guitar part that has maximum groove. It's all about melody and groove, basically. We're all about guitar riffs, we love them."
Jon: "We have riffs throughout every song. I think it's really important for us to write big riffs and to try and find the catchiest melody we can and to make it sound heavy and groovy."
John: "Some of the best riff writers were Rage Against The Machine. They wrote the sort of riffs where everyone in the world knows the riff almost better than the melodies or the vocal line."

TG: What is the key to writing the perfect riff?

Jon: "Melody. You can shred all day long, but if you ask someone to repeat what you shred, it's not going to stick in their mind. You need a great riff that people can key into. Just keep it really simple."
John: "Yeah, I think simplicity is key. We were watching a Muse DVD the other day and Matt Bellamy - definitely up there with our favourite guitarists of all time - started playing a riff in between songs, it looked ad-libbed, and the others just played along. We thought it was the coolest thing."
Jon: "Yeah, and here's a guy that can play Mozart, yet it's all about simplicity."
John: "So we got back to the studio and I was like, right, for Download [festival], I'm just going to come up with a little two-note riff and we're all going to chug along before we begin. It was awesome!"
Jon: "I think there have been a lot of good riffs since nu metal. For me, nu metal is so good… if you take out the vocals. If you keep the guitar, riffs like that are great."

TG: How important is tone to constructing a riff?

John: "As a guitarist you feed on the tone. If you're playing through something really crappy and you feel rubbish, then it's harder to write the riff that you can feel is there. Our tone is quite different. We use quite a lot of mid in it, even though it is still quite heavy, so it's crunchy and biting."
Jon: "It snarls! For us we want the mids, because if you take them out it just sounds like a bee just buzzing around. Whereas, if you've got loads of mid, well I just imagine a shark chomping…"
John: "That can make a riff fantastic. What we often do, and what is classic nu metal, is put a lo-fi pedal/sound on something to introduce a riff."
Jon: "I think it's important to have that understanding of dynamics. If you don't have dynamic songs then there's no telling how heavy something is, so you can use dynamics to make an impact."
John: "It might sound stupid and a little bit cliché, but quite a lot of what is important to a riff is the silence in it. You can really draw it out and that will make a riff so cool… And you can also mute strings for a sort of percussive sound."

TG: What's your favourite riff from your forthcoming album, 'Inside This Machine'?

John: "I'd say 'Lily White Lies'. The whole verse of that is just a proper rock 'n' roll riff. It's almost sleazy. Laurence [Renè, vocalist] wrote that one."

Jon: "It's just the jumps, it's the distance between octaves - you've got to get up high and then get down low and skip along the fretboard."
John: "We're quite an active band on stage and that can make it very hard to play live!"
Jon: "Again, it just comes down to dynamics and space, because you've got to have space between your pitches."
John: "Yeah, something's not heavy unless you've got something quiet before it. If you want to make something heavy, you need something quiet and melodic before. I think a lot of bands forget that. It's all about contrast."

Too many cooks don't always spoil the broth

TG: Do you find that, as a band with a few contributing-guitarists in it, one of you is the primary riff writer?

Jon: "Laurence writes the sort of glam-sleaze riffs."
John: "Yeah, he comes out with the really dirty ones, like 'Crazy And Me' on our first album [Corporate Flesh Party] was Laurence."
Jon: The riff in the middle was both of you wasn't it? They both had a riff and it worked quite well together, so we blended them. I think you can tell who's written each riff. Me and John are more like clinical, we jump about a lot more in our riffs, whereas Laurence riffs are more groovy."
John: "His definitely have groove to them. He doesn't play the guitar like a normal person would - he looks at it completely differently. So he'll come up with bits that people who have been trained [to play] wouldn't."
Jon: "Me and John have got a lot more metal in our heritage. I'm really influenced by Slipknot, so we have a lot more of that in our playing."

John: "I'm thinking Wes Borland and 'Break Stuff'. It's just two notes, really simplistic, yet it sticks in your head."
Jon: "I'll go with Matt Bellamy. No one in the world has ever written a riff as good as the one at the end of 'Stockholm Syndrome'! That is my benchmark: every time I'm writing a riff I think 'is it as good as that riff'? If it's not, I chuck it away."