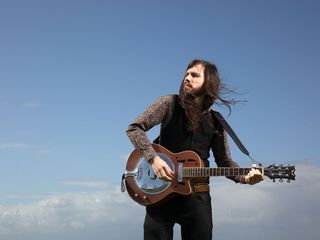 The influence of John Lennon touches every genre of music and the blues is no exception. As he packed his bags before heading out on a UK tour supporting fellow bluesman Philip Sayce, Marcus Bonfanti told TG about the impact that Lennon had on his own guitar playing, singing and childhood.

Can you remember when you first heard of John Lennon?

"My dad played me Beatles records pretty much from when I was born. I was always a big fan of the weirder stuff like 'Strawberry Fields Forever', the stuff where John Lennon started going psychedelic. For a kid the melodies are so amazing. As I got older I started appreciating his songwriting and his lyrics a lot more. I can listen to 'Imagine' any time I want because it's in my head. Tunes like that and 'Jealous Guy' are so iconic. They stay with you for years. You don't forget a note of them."

When did you get into John's solo stuff?

"My dad had the 'Imagine' record. He used to make me cassettes of it so I wouldn't scratch it up! A couple of months ago I was over at his house and he'd found this old cassette. It was me aged about five singing all the words to 'Imagine', unaccompanied."

So you could say that John influenced your decision to become a singer?

"Yeah. I remember listening to 'Twist And Shout' ['Please Please Me', 1963]. The vocal on that is one of my favourites. It's incredible. He's singing it like his life depends on it."

How do you rate John as a guitarist?

"He's the sort of guitar player I like. I do like someone who digs in and plays from the gut, rather than from the head. For me, that's what John Lennon did."

Is there a specific song where John nails that approach that for you?

"His solo on 'The End' ['Abbey Road', 1969], when he's just hammering it. It's just perfect. I love George Harrison as a guitar player as well - and Paul McCartney. They're both just incredible guitar players who play some sweet blues on 'The End'. Then Lennon just steams in with this real guttural stuff and he means it. He can really play that thing. I think his guitar playing was fantastic. He's got a real cutting tone and when he plays a note you feel that he means that note more than anything else in the world."

"Definitely, and I think that's why his approach worked in The Beatles. You read how George Harrison would meticulously obsess over his guitar parts until he got the perfect part for a song. That's brilliant because you've got one guy who's put so much thought and effort into crafting these amazing guitar lines and then you've got John Lennon just ploughing in and playing these spontaneous parts. There are so many reasons why The Beatles were the best band ever!"

John displayed a great, and unique, fingerpicking style on songs like 'Across The Universe' and 'Dear Prudence'…

"I like his fingerstyle guitar playing. I do a lot of blues fingerpicking and one of the first songs I learned was 'Julia' ['The Beatles' aka the White Album, 1968]. It was just an amazing sense of achievement that I got his picking pattern down. It's just a beautiful pattern to play."

Would you say John also influenced the way you play guitar?

"I go for the same approach that I believe he had. You play what's inside. Play what you're feeling at that time, rather than what you've learned over the years of practising guitar. You have to learn all that stuff to be able to play the f***er, but the real moments come when you play from your gut and I think that's where Lennon was always playing from."

Lennon was a 'driven' songwriter

John and Paul's songwriting evolved incredibly quickly. It's amazing that only four years separate 'She Loves You' from the release of the 'Sgt Pepper's Lonely Hearts Club Band' album…

"I know it's frightening! There are other bands that have really progressed, like Radiohead. You can hear a natural progression from the first album to where they are now. But no-one has done it in the time frame that The Beatles did."

Rumour has it that some naughty substances were involved!

"Yeah! But I think you've also got to have that drive to constantly progress. When you watch interviews with Lennon, he's got that look in his eye where he's constantly thinking where to go next. I consider him the biggest driving force in The Beatles to take it forward. His songs were the ones that got weirder first."

What do you think is Lennon's greatest legacy?

"There's something in his writing for everyone. I can put on a John Lennon record no matter what mood I'm in and there's a track for that mood. He wrote about stuff that matters to me. Songs like 'Julia'. Put that one on when you have a moment alone and it makes everything seem OK. If I could write a song half as good as, John I'd be happy."