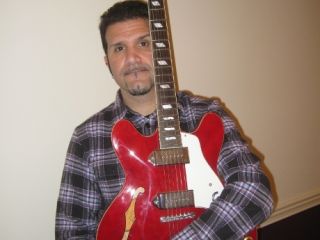 John Lennon didn't just play rock 'n' roll. According to Anthrax drummer (and closet shredder) Charlie Benante, he also played heavy metal. From 'Revolution' to 'Helter Skelter' and beyond, Lennon's influence on the metal scene runs deep. Charlie explains how and why…

How do you think Lennon's guitar playing evolved through his solo career?

"Well, back in the very early days of The Beatles, you've got to remember that John was pretty much only a rhythm guitar player. He kept that side of his playing going through most of the early Beatles songs. Once he discovered Bob Dylan, though, another side of his guitar playing started to come out. For example, in songs like 'Norwegian Wood (This Bird Has Flown)' [from 'Rubber Soul', 1965] and 'You've Got To Hide Your Love Away' ['Help!', 1965]. Then, when he went solo, there were a lot of songs where the acoustic guitars became more of a lead element in the song. Not lead guitars as in guitar solos - they were 'lead' in the sense that they were at the front of the track and drove the song forward."

"I guess John always wanted to be more of a blues player, but most of the stuff he wrote in the early days came more out of the rock 'n' roll, Eddie Cochran style scene. The guitar playing on his solo work was totally different to that, though. He was more of a rock and pop player up until The White Album [aka 'The Beatles', 1968] and then the dirty, bluesy, rock side came out of him after The Beatles."

Which of Lennon's solo songs are your favourites?

Riffs to test your picking hand

Name a Lennon riff that all guitarists must master…

"Oh, man. Check out 'Dear Prudence' ['The Beatles', 1968] where his guitar drives that song. The way Lennon picks in that song was incredible. I remember trying to learn to do it when I was a kid, and I could never get the picking down right. It was a real challenge for me, and to this day that arpeggiated riff stands out as one of the trickiest fingerpicking challenges there is. His playing locks right in with the rest of the band on that song."

Which are your favourite Lennon guitar parts?

"One of the best Lennon guitar parts is in 'Everybody's Got Something To Hide Except Me And My Monkey' ['The Beatles', 1968]. I love the guitar in that song! He was probably playing a Gibson or Epiphone Casino, plugged directly into the board. I also can't help but think of 'Revolution' [the B-side to the 'Hey Jude' single, 1968], of course. It had one of the greatest intros ever, and it's such a heavy song. You hear it and you immediately think, 'Holy sh**!'"

Are you a fan of Lennon's more experimental songwriting?

"Oh, yeah. Take a song like 'Being For The Benefit Of Mr Kite' [from 'Sgt Pepper's Lonely Hearts Club Band', 1967], which is trippy as f***! Only John could have written that song. It's amazing. I've read interviews with John where he said that he should have sung a particular song instead of Paul, because the song was more in his style. I didn't have a preference for one over the other, though. "

Can you explain John Lennon's influence on the hard rock and heavy metal guitar playing of today?

"Well, a lot of The White Album is very heavy metal, because you've got 'Dear Prudence' on there and also 'Helter Skelter', which was absolutely bombastic. That's the only way to describe it. Another one of my favourites is 'I Want You (She's So Heavy)' ['Abbey Road', 1969], which has massive guitar parts. Even 'Come Together' [also 'Abbey Road'] has a famous chord progression in it. The way I see it, some of these songs are practically nursery rhymes at this point, because even people who have never heard of The Beatles have heard The Beatles, know what I mean?"

Finally, why is Lennon still such an important musician?

"The Beatles were the blueprint for everything. It all started with them. There wouldn't be any other form of music if it wasn't for them. I know people will read this and say, 'Oh, come on, that's rubbish - how can you say something like that?' but I can tell you exactly what forms of music came after The Beatles. They probably would have got back together after a while, I think. They would have gotten everything out of their systems after a few years and come back to each other, to do more damage to popular music. I always have these fantasy conversations with my Beatles friends. We always say, 'What if all The Beatles had lived?' and 'What if they got together to do a tour - what price would a ticket be?' I always tell them that I would pack up and follow that tour everywhere it went."