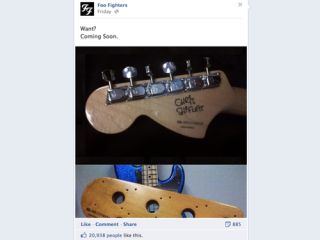 Foo Fighters fans will be happy to hear that Fender is working on a signature Telecaster with guitarist Chris Shiflett, plus a signature bass for Foos four-stringer, Nate Mendel.

While neither guitar has been officially announced yet, a post from Foo Fighters' official Facebook page this weekend shows a picture of a Telecaster headstock complete with Shiflett's signature, and a bass headstock and body. The post simply reads: "Want? Coming Soon."

Details on Shiflett's model are limited, but it does bear a Mexican (MX) serial number so we're not expecting it to break the bank. Chris Shiflett has been an avid Telecaster fan for the last few years, using plenty of Teles both in Foo Fighters and on his awesome country-inspired album, 'Chris Shiflett & The Dead Peasants'.

Throughout the recording and current tour schedule for Foo Fighters' 'Wasting Light', Chris could be seen with his 'Shifty' Telecaster copy. The white-bodied guitar is based on a Telecaster Deluxe, complete with dual humbuckers and Chris' 'Shifty' decal in a pseudo-Fender font, and was put together by Shiflett out of Warmoth parts. We'll be posting more details here as soon as we get them.

Meanwhile, a recent interview with Fender reveals that Chris Shiflett & The Dead Peasants will start work on a new album "in the coming year".

Foo Fighters will be headlining this year's Leeds and Reading Festivals on 24 and 26 August respectively.