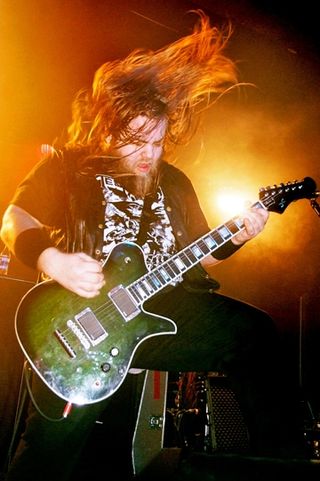 Cancer Bats released their cover of 'Sabotage' by the Beastie Boys today and we caught up with guitarist Scott Middleton to find out how the song came about.

TG recently spoke to Scott Middleton and had a nice chat about Cancer Bats awesome new
album, 'Bears, Mayors, Scraps And Bones' (due 12 April), his amazing guitar tone and other general gear-geekery. However, the chat was so nice that it carried on for a bit longer that it should have and we were left with a few bits and pieces that we couldn't cram into the mag.

So, for those of you that have been enjoying the recent video (below) of their aforementioned cover of the Beastie Boys' classic 'Sabotage', here's an explanation of how the song came about.

Make sure you check out TG201 (on sale 16 April) for Scott's full interview.

"We were doing quite a few festivals last summer and we like to play cover songs here and there and we thought that maybe we could do another one someday. However, the ones we'd picked before were maybe not songs that people really knew and they were getting worse reactions when we played them than when we played our own material!

"The idea is to pick a song that most people would know, so that someone that doesn't know your band can tap their foot and sing along to your set. I think Liam just came up with the idea - I think he had a dream about it or something - and he just came in and was like, 'Do you wanna try 'Sabotage'?' and my reaction was 'No way! How's that gonna work? There's hardly any guitar, it's mostly bass and turntables… How is this gonna happen!' And he just said 'No, no, no - just try it! Think about it!'

"So I sat there with the song playing in the background in our practice space and I figured out the notes, where the bass was going in the song and I was just like, 'Well what I can do with the guitar on this?'

"I have a Morley Steve Vai Bad Horsie wah pedal with the switch-lift - which means it only works when you put your foot on it and it disengages when you take your foot off - and that allowed me to just click on that wah and imitate the turntable noises and then take my foot off and go back to the regular rhythm.

"That pedal was pretty key to being able to play the song, but we just tried to come with something that was interesting. We had a ton of fun making it and it was just one of those things that really came together, it wasn't calculated, it was just like, 'Lets try this' and people really liked it.

"When we recorded it and people actually heard it, all of the record labels and management were like, 'Holy shit! This is amazing! You HAVE to put this on the record now…'

"Originally, we weren't even planning to do that, but we just thought that, if people really like it this much, then sure, why not?

"You're always going to think well are people only going to care about this song, but this is our third album and we've got fifty other songs and the cool thing is that our own old fans are just as excited about it."