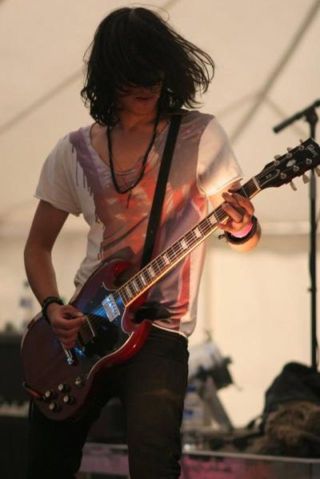 Neelesh Vasistha returns to talk about his experiences on the Guitar Higher Diploma course at The Institute. For the last few years TG has sponsored a scholarship at The Institute (formerly ICMP and The Guitar Institute), one of the leading contemporary music schools in the country...

"I could write books about India but I'll stick to the music. I caught a gig by Kickstart Freedom in Mumbai's Hard Rock Cafe. Sadly, it was shambolic.

"For the most part music is an art form and subjective; what may be torturous to some ears may be beautiful to others. That's all well and good. However, for a band playing in one of the city's biggest and most reputable venues to an audience of hundreds there is absolutely no excuse to be out-of-tune or blatantly under-rehearsed. These are basic elements of professionalism that were unashamedly absent that night.

"In Delhi however, I did manage to catch a gig at the swanky Blue Frog venue. Not rock this time but Qawwali, a 700-year old North Indian musical style sung by two of the masters of the genre. Although my stance was more of 'appreciation' than riveting enjoyment, I've literally never heard vocals so emotive or dextrous. 'Twas a truly fantastic show that's given me the impression that new imported contemporary live music in India has a long way to go before it can compare to the proficiency of the traditional classical styles.

"Upon my return to Blighty I played Tristanbury, a tiny 300-person invite-only festival held in what appeared to be an enchanted forest in Windsor. A bizarre place indeed, a vibe I can only describe as somewhere between a Woodstock re-enactment and a forested pagan ritual. After playing both the Isle Of Wight and Reading festivals this year, this certainly was a strange way to end the festival season.

"My EP with Rufio Summers is done and sounding fantastic. It's not due for release for a while yet, but do check out preview of the track 'Do You Wanna' Leave' on my Facebook band page. I suppose whilst you're there you may as well 'like' and comment!"