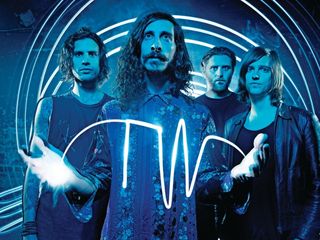 We asked Turbowolf guitarist Andy Ghosh to kill some tour van hours and pick his top 10 riffs. We reckon you might be surprised by his choices…

Three of the UK's most exciting new guitar bands, Turbowolf, Hawk Eyes and The James Cleaver Quintet are currently tearing the country a new excretion pipe on their November tour.

As we're all fans of ma-hoosive riffs, TG thought we'd ask Turbowolf guitarist Andy Ghosh for a guitarist's-eye view of his top 10, and he was kind enough to oblige.

Andy says:
I f***ing hate this song. Every time I hear it start I'm always blown away by the opening riff, then I feel that same wave of guttedness when I remember that after about 50 seconds it's going to turn into a bag of yodelling nonsense. Utter crap. And that stupid pixie bit in the middle... Such a shame, as the riff is one of the all time greats. They could have played it with power chords and it would have sounded rad, but all the major 7ths just send it into another dimension of awesome. Amazing. And rubbish.

Andy says:
I had a year or two in my youth when I refused to listen to anything other than the Misfits (Danzig-era only. Anything after '83 is NOT the Misfits). The 'London Dungeon' riff is so massive and ominous, and the guitar has that gnarly cello sound. Their recordings were super ghetto so I assume that must have been a total accident. The record has this held-back, brooding feel, but I've seen footage of the band playing the song in '82 and it's FULL ON.

Andy says:
I only discovered this one recently. I saw the 'Rust Never Sleeps' film on TV a little while back and I couldn't believe this tune. The riff is exactly the sort of thing I tend to write, using the same sort of sound. Neil just does it way better and his sound is way cooler. This riff is in my head all day, everyday, and I love it. I actually went out and bought a clone of the pedal he uses, just so I can play this riff.

7. The Rolling Stones '(I Can't Get No) Satisfaction'

Andy says:
Bit of an obvious choice, but it seemed wrong not to include it. It still sounds heavy as hell today, I have no idea how it must have hit people when they dropped it in '65! I heard Keef dreamt the riff up in his sleep and intended it as a horn line. He used the fuzz to get an idea of how it would sound on brass. The recording's just perfect, everything about it. That incredible fuzz grit, the driving drums, the tambourine. Just try listening to it without thinking "YES".

Andy says:
Jack White is the guy. Everything he touches turns to solid gold coolness. Guitar, vocals, drums, keys, it doesn't matter. He does it all with his own unmistakeable style and better than anyone else. In a world where metal and punk have become safe and sanitised, he's one of the last really dangerous sounding guitarists. The riff in this song is one of the best ever.

Andy says:
Just simply an irresistible riff. The notes are amazing. It gives you just enough and not a drop more. Also, the way the drums switch halfway through the riff is super cool - it knocks you back and forth. The squelchy fuzz is badass too. I don't know what else to say, its just about as good as a riff can ever get.

Andy says:
I had an absolute nightmare choosing a Sabbath song. Impossible really, the whole top 10 could have been them. This has to be the one though, one of the most iconic riffs of all time. If you think you're bored of hearing it, go listen to it super loud. It'll tear your head clean off. Iommi's the only reason any of us are playing heavy riffs, without him there would be nothing. All of you should write him an email today to say thanks.

Andy says:
Absolutely the most awesomely primal, chest crushing display of massive, BRUTAL riffology I've ever heard. There's no way I can listen to this just once, it has to be played at least three times. All the way through I'm punching the air and screaming. Best thing ever.

Andy says:
Every single one of their songs is a lesson in riff warfare. I wanted to choose one of the less well-known tunes, but the riff in this is just absolute perfection. The groove, the choice of notes, the sound, the way the pick scrape intro builds up to the riff. Hearing this makes me want to quit music and just listen to these guys all day.

Andy says:
I remember when this came out my friend was like "Have you heard the new White Stripes track? It's pretty weird". I put it on and was completely blown away. I couldn't believe what I was hearing. At the time I was messing around with some similar sounds and feels, and this track sort of let me know I was heading in the right direction. I love all the slight variations on the riff he throws about. There's no way I'll ever get tired of hearing this.