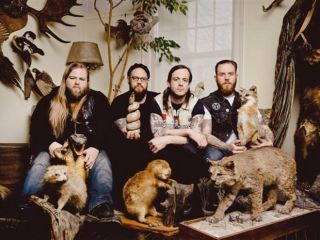 That's Scott, cradingly the crocodile - and that's not a euphimism.

Scott Middleton, guitarist with Canadian hardcore kings Cancer Bats and a man with more riffs to his name than Riffy McRiffer-Rifferson, of Rifford, Tennessee, picks 10 of his favourite stomach-churners.

While you're using Google to see if Rifford, Tennessee is an actual place or not, check out Scott's selections and read what he has to say about them below.

This weekend (21 April) Cancer Bats head to London for The Pentagram Tour, which will see them play five venues in the capital - a total of six sets, starting and finishing at The Old Blue Last in Shoreditch - in just one day. Find out more about that over on the Cancer Bats website.

Scott says: "This verse riff has got to be one of the best thrash riffs ever written. It's fast, heavy and has this amazing palm muted harmony that just sounds so cool and upbeat. Rocky George and Mike Clark were two of the best guitarists in the Crossover Thrash scene, and this riff really shows of their chops. When I hear this I just wanna headbang, air guitar and circle pit uncontrollably!"

Scott says: "How could I not include a song called 'Big Riff'? Cave In's record 'Jupiter' turned the hardcore scene upside down, to where a band could push the limits of their sound. They could be less metal and yet be heavier all at once. They were more melodic yet darker! This was such a breath of fresh air to me, and this song, especially, changed everything. I love how the intro/verse riff is so pounding and brash. It's just so full of raw attitude and is so utterly simple. This band is such a huge influence on my guitar playing in Cancer Bats."

Scott says: "Finally! A contemporary band playing metal in a unique way! The opening riff is so massive and epic it blows my mind! I remember the first time I heard it, I was record shopping in Toronto and I immediately put down my stack of vinyl and went to the clerk to ask what we were listening to. He told me it was a French band called Gojira, but that their records weren't out in Canada yet. I was determined to get a copy so on our first trip to the UK I had my friend track me one down ahead of time, so I didn't have to wait to get my hands on it. All because of this one riff..."

7. Danzig 'Until You Call On The Dark'

Scott says: "This is from the highly underrated 'Danzig IV' record, which I actually hold as one of my favourites. The main intro/chorus riff in this song is classic Danzig, but John Christ adds extra fuzzy distortion to really make it sound dark and dirty with the song's funeral dirge pace. I love how he throws in pinch harmonics sporadically to make it sound even more evil. A lot of people think I get that aspect of my playing from Zakk Wylde, when actually, it comes from Danzig and John Christ!"

Scott says: "'Symbolic' to me is one of the best all time death metal albums, and its eponymous opening track's first riff is just so evil and catchy you're immediately drawn in! It's not unlike something maybe Slayer would do, but Chuck Shuldiner really has such incredible touch and tone, that it could only have come from the genre's master! What really set Death apart from so many other bands was Chuck's ability to fuse melody and brutality. This is the kind of riff you hear once and remember forever, which so few death metal bands - especially today - ever do!"

Scott says: "So many amazing riffs from this band and certainly every one from the 'NOLA' record could be on here, but 'Rehab' has always been a favourite of mine. The way Pepper Keenan and Kirk Windstein's guitars harmonise with Phil's vocals throughout the song is just pure brilliance. I love that the intro/verse riff kind of just cycles over and over with an almost meandering pattern - the guitars sing as much as the vocals do."

Scott says: "One of my all time favourite bands, and another huge influence on my playing. I love how this band evolve from record to record. 'Hollowman' was the first Entombed song I ever heard and it was the bridge riff that really got me hooked. It's so sinister and evil the way it snakes in and out of itself. When I was 12 and hearing this for the first time, it literally gave me the chills! It's such genius the way it slows the pace of the entire song, and then kicks back up to double time, with the second guitar instead coming in with the riff an octave lower on power chords. It's so driving and heavy the way it all comes together. So many bands these days are trying to rip off Entombed's tone, but without riffs and brilliant songwriting like this, no one else comes close! Bow to the masters!"

Scott says: "I can remember way back in 1994 when I first heard 'Burn My Eyes'. Every thing had changed! Yes, there had already been Pantera, Biohazard, and Sepultura. But in many ways to me Machine Head eclipsed all of them perfectly. Heavy as any death metal band, but with killer groove, intelligent lyrics and the energy of thrash! I have a really hard time picking which is the best riff in this song, because the intro is so killer with the natural harmonics (that no one else was doing at the time). But as a guy who thinks the palm muted breakdown is a really overdone and tired thing, this for me was the break down that started and ended it all really. So unbelievably heavy and memorable, every time they play this live, the crowd explodes into the toughest pit. The heaviness of the chugging is multiplied by Robb Flynn Yelling "SLOW" as the tempo decreases. CRUSHING!"

Scott says: "This band is untouchable. Neurosis are in a league of their own. They sound like they come from a planet where men never smile and certainly don't play or make guitars sound like anyone else does! The intro riff alone sounds like someone is steamrolling your face with an entire factory's worth of metallic torture weapons! Seriously though, no one is heavier or darker than this. Steve Albini's production took them to another level, and this riff was the stepping stone into Scott Kelly and Steve Von Till's world of pain and menacing heaviness."

Scott says: "This was the first band I ever saw play live, and they're still one of my favourites this song starts with a cool bassline that is then mimicked by J Yuenger's killer guitar riff. I loved how different and cool this was compared to everything else out at the time. So catchy and groovy, but totally a metal riff. I love the way the drums interact with the riff throughout the song making you want to headbang like crazy! Such a great party jam, I know most people love 'Thunderkiss '65' but this song was always my favourite! Yuenger makes his guitar sound like a goddamned drag racer!"