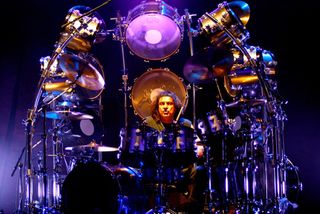 Vinny Appice has unveiled details of his brand new band.

Vinny told Metal Shop: "I've been working with a new band. It's a cool thing. This thing just kicks ass. Unknown singer. His name is Dewey Bragg. And Mark Zavon on guitar. And Rex Brown from Pantera has played on some of the tracks. He's involved in it, too. And it just kills. So this will be out next year. We just hooked up management."

So, with Vinny moving on to a new project where does that leave Tony Iommi and Geezer Butler? A reunion with Bill Ward and Ozzy, perhaps?