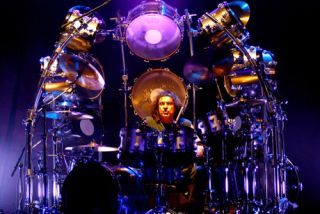 Vinny Appice has hit out at Heaven and Hell's The Devil You Know album, saying the whole thing was written with a drum machine.

Discussing the record's writing sessions, Vinny told The Great Southern Brainfart: "It was stupid. I wanted to go into a rehearsal plane and jam, and work the shit up loud. That's the way we did Mob Rules and Dehumanizer.

"But instead it would up with us working in Ronnie's studio with a drum machine.

"It wasn't inspiring. You can't hang or swing on a drum machine - it's hard to work that way. If we'd been in a room rehearsing, the music would have been a lot more aggressive and a lot more Sabbathy.

"When the album came out I got feedback like, 'Vinny didn't play s*** on the drums.' I was like, 'Okay, but you guys don't know the whole story.'"