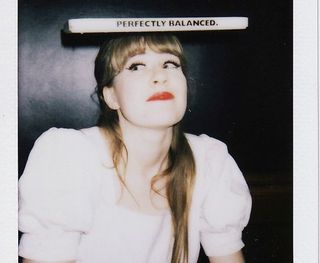 Female drummers have come a long way since Karen Carpenter back in the '70s. Over the decades they have become more and more prominent, thanks in no small part to the likes of Cindy Blackman, Samantha Maloney and Sheila E.

At the forefront of the latest crop of stickswomen is The Like's Tennessee Thomas (daughter of Elvis Costello drummer Pete Thomas). With the band enjoying rave reviews for new album Release Me, we caught up with Tennessee as she prepares to tour the globe with the all-girl retro popsters.

What first attracted you to drumming?

"It came naturally! I grew up to the sound of the drums. Every morning I woke up to my dad playing! When I was 13 I first picked up the sticks and thought to myself, 'I can do this!'"

Which drummers influenced you when you were starting out/still influence you today?

"My favourite modern drummers are Homer Steinweiss (of the Dap-Kings), Matt Helders (Arctic Monkeys) and Fab Moretti (The Strokes) and from the past, Charlie Watts, Keith Moon, Ringo Starr and the Motown drummers Benny Benjamin, Uriel Jones and Pistol Allen. But the biggest influence is my dad."

What kit/set-up do you use?

Do you think it's harder for female drummers/bands to be noticed and taken seriously?

"There are still very few female drummers... not enough! When I was 13 I saw a band with a female drummer, and at that point thought, 'Oh! Perhaps I'll give it a try!' Before that I didn't really think it was an option."

Have you encountered any negativity/restrictions from the music industry?

"Everyone has always been very nice to me. I think female drummers still come as quite a surprise to most people! I always play in a dress. Not enough boys offer to help me pack up my equipment though. They're probably terrified! (Especially after the show when I'm all covered in sweat and my hands are bleeding hahaha)."

We recently interviewed Leah Shapiro and she told us after gigs fans often say to her, 'I didn't expect you to be able to play that well', have you experienced anything similar?

"I hear that after every gig!"

"Our album Release Me is coming out! We'll be touring all year!"

For more on female drummers pick up the latest issue of Rhythm, which features Geoff Nicholls' view on that very topic.