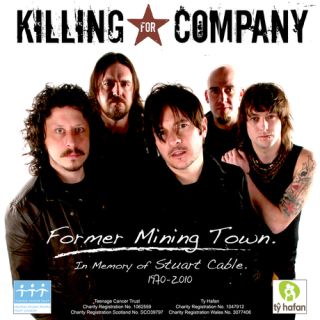 Killing For Company are to release a charity single in memory of former drummer Stuart Cable.

Cable, who is best-known for his time with Stereophonics, unexpectedly died on 7 June, days before he was due to play Download Festival with his new band.

Killing For Company will release 'Former Mining Town' on 25 July, with proceeds going to Teenage Cancer Trust and the Tŷ Hafan hospice.

His Killing For Company band members commented: "To think Stu won't be joining us on stage anymore is a hard thought to face and although his passing is tragic, we hope to draw some positive from this difficult time. As a band, we are honoured and privileged to have shared the experiences we've had with Stu.

"We will be releasing the single, 'Former Mining Town', and dedicating it to Stuart; he was hugely proud of the album and this track in particular. All funds raised will be donated to Teenage Cancer Trust and Tŷ Hafan."