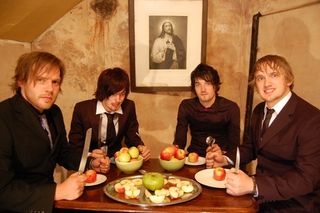 Sounds like: The Eighties Matchbox B-Line Disaster on a sugar-fuelled riot through a fairground.

Why should you check them out?: In an age in which pop-by-numbers and cardboard cut out idols dominate the music industry, bands like La Folie should be cherished.

Their debut album sound quite unlike anything else. Yes, there's flashes of Queens Of The Stone Age and The Eighties Matchbox B-Line Disaster, but there's also an undeniably accessible indie rock charm that somehow works alongside their dark, sinister side.

Drummer Dan Lindop does a superb job in keeping the band's most definitely out-there sound (which conjures up images of League Of Gentleman sketches on several occasions) in the commercially accessible bracket by laying down beats that are rock steady yet fluid enough to not restrict La Folie's circus-chic sound. A band that has cult favourite written all over it.