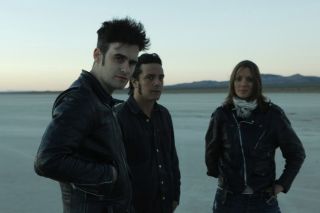 Leah Shapiro has enjoyed and endured a bumpy ride since joining Black Rebel Motorcycle Club back in 2008.

Despite clocking up reams of air miles with sold-out shows all over the globe, 2010 album Beat The Devil's Tattoo, stalled at a disappointing peak of 58 on the UK chart. The band are now back, with Specter At The Feast dropping next month. We caught up with Leah to get the lowdown on the band's return.

What was your approach, drum wise, on Specter At The Feast?

"Many of our songs start out by us just playing up and loud together. We aren't really the greatest at talking, so when we write it tends to work out better if we don't talk too much but let the music do the talking. Its usually pretty obvious what a song wants from us, so really the music tells me what my approach needs to be. That being said, I tried to be mindful of not leaning on old tricks and habits and make sure to get out of my comfort zone."

There's plenty of tasty playing in there, were any tracks particular troublesome?

"Funny Games took a long time to complete and gave us quite a bit of headache. The groove for the verse came first in this song and I played it for Rob to see if he would like it. Then it took us forever to figure out where it should go from there. Lose Yourself sounds really simple, but recording that song was quite a challenge because it needed to have a very particular feel and its pretty delicate in that way. It's also a fairly long song so there is quite a lot of room for f***ing that up."

What kit/set-up we you using?

"My trusted Sonor Hilite and Paiste cymbals. I have actually been playing Sonor drums since before I was in Black Rebel Motorcycle Club. Nick, their old drummer, played Vistalites so when I first started I played his old drums but I love my Sonors and ended up bringing them out on the road after a few months. The black Hilites that I have been using for a while now were the first drums my dad bought for me when I moved to the US. Sonor actually built new drums for me that I will be using for this tour. I have only seen photos of them but they look so beautiful and I can't wait to play them!"

"Right now I just wrapped up five days of promo in Europe and tomorrow morning I fly home. As soon as I get back we started rehearsals for tour. Our first show is 10 March."