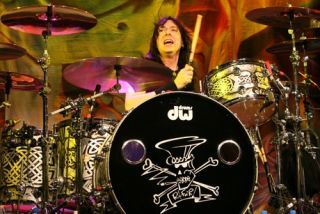 Anyone who saw Slash during his 2011 UK tour will surely agree that drummer Brent Fitz made the position completely his own, playing beats originally laid down by everyone from Josh Freese and Steve Ferrone to Steven Adler and Matt Sorum with a huge slice of style.

Slash obviously thinks so too because Fitz has come off the road with the top-hatted guitar ace and headed into the studio to record the former Guns N' Roses man's brand new album.

While he was over in the UK earlier this year we sat down backstage with Brent to talk about writing, recording and touring with the rock legend, hitting the clinic circuit and how his bass playing skills saved the day while on the road with Slash.

How are things shaping up with the new Slash album?

"Basically Slash has a lot of great ideas and he and Myles have been putting riffs and melodies together and the rest of us have been jamming in soundchecks. It's kind of like, I hate to say the old school way, but there's a lot of ways to record new music these days and instead of just going to the studio and creating something and then it becomes a ProTools adventure this is more of coming up with a cool guitar part, a good melody and then as a band we come in and come up with ideas."

What are the challenges for you as a drummer?

"The cool thing as a drummer is that Slash already has an idea of what he's feeling or hearing. I really like working with other musicians that say, 'I'm hearing this, what do you think?' Nothing's ever written in stone."

And this time it'll be one band as opposed to lots of guest stars?

"I think this band is going to make a record as opposed to Slash's last record which I don't think he knew what he was getting into yet. He had a bunch of songs and heard a bunch of singers he wanted to sing on it and of course he had a great drummer in Josh Freese and Steve Ferrone was on it and Steven Adler. This will be the band that has been touring for the last year and a half, I think it will translate well. It will be a team effort with everyone's contribution as a band. It's not just the Slash and Myles project. Even though it's Slash's name on the marquee I think we've created a band. Slash has created a band. We're just all part of it."

Are there any plans set in stone for writing new material?

"I think we'll just do little spurts of writing. There's no real pressure which is great. Slash is full of great music so we'll take our time piecing it together. I'm hearing December so I'm sure early next year they'll definitely be some recording and a record released and then maybe next summer we'll be back on the road. I don't like to sit away at home not doing much. That's why clinics are great, because I get to get out and as drummers we've got to keep our chops up. I live in Vegas, it's not like I'll join some show band on the Strip. You won't find me backing Celine Dion."

Your versatility keeps you busy though

"I play guitar, bass and piano as well so I like playing other gigs too. I played bass with Slash on a show. I had to play in Russia when our bass player had to be flown home with a detached retina. I was able to move over to bass that night and our drum tech John Douglas moved to drums. I don't think Slash knew I played all these instruments. One of the reasons I got the Slash gig was I was introduced to some people in his camp through a show I was doing in Vegas called Monster Circus. Fred Coury was on drums and I got called at the last minute to play keyboards and guitar. Dave Kushner from Velvet Revolver was one of the guitar players. Dave and I became friends. Then I got the call to play with Slash and we did the Tonight Show with Jay Leno. Dave saw the show and was like, 'I didn't know you played drums!' I love those kinds of things."

What kind of set-up will you be using in the studio?

"I would say what happens when producers get you in the studio and they're really set on, 'Hey this kit has been working on these ten great records, why don't you try this kit first?' I'm not adverse to trying a studio kit. Rick Valentine is Slash's producer, he's done a lot of great records and one of my favourite drum sounds is Songs For The Deaf, that is Eric Valentine right there. You totally hear it on Slash's record too. It's probably that one kit that has a certain magic. I'm going to start with that kit and see how it goes."

What did you think of the drum sound on the last Slash record?

"Slash's record reminds me of an AC/DC record that everybody's been trying to recreate. It seems like there's been a few records for drummers that everyone goes back to, like great Zeppelin albums, great AC/DC for that meat and potatoes rock sound. I would say the sound that Slash got on his last record was very similar to Back In Black, not identical but just enough. Snare drums that sound deep and fat as opposed to a lot of snares that sound like they're out of context with rock music. You hear a snare drum that's tuned so high it's not finding it's place in the mix. If you listen to Appetite For Destruction there's a perfect drum sound. I'd say if we could go back and get something like that, it was perfect then so let's bring it to now."

Has it been tough playing all of these drum parts written and played by different drummers night after night on tour?

"I've found that when I think about myself after playing some of these great Guns N' Roses songs I still go back and listen to the originals or I'll make tapes and listen to myself playing them because sometimes you go back and complacency can set in. I love to go back and check to make sure I've got the right energy. I'm one of those crazy over-analytical drummers. The beats will have my feel because I'm playing them. If you're a fan and come to the concert and I start playing 'Sweet Child O Mind' in a different vibe, forget it."

"I've had situations like Alice Cooper where I've had to infuse myself into a band where Eric Singer was part of the band but also doing so Kiss shows. I would slip in on his drums so if you looked up it was a different guy behind the kit but it wasn't my gig to change the vibe."

Clinics are also now on your radar

"I'm doing something I'm not very good at but I'm working on it. Being a new clinician, when I was a kid playing Rush records in my basement I never envisaged having to talk to an audience, it's totally different to playing with a band, to actually go up and offer advice and insight. I think the key to a good clinician is someone who anyone can get something out of. I share enthusiasm for drums. It doesn't have to be me giving a drum lesson specifically. A lot of times I would go to clinics but not get my questions answered, I wanted to know how the hell I could get on that stage. I think that's the key."