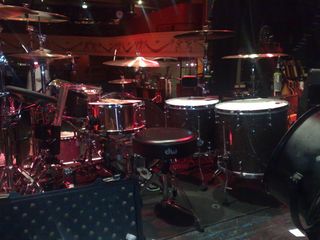 We caught up with Boys Like Girls drummer John Keefe ahead of their recent storming London show and got the lowdown on the pop rocker's sizeable set-up.

"I play SJC Drums. I work with Mike at SJC, he builds my drums and does a fantastic job. We've done so many different kits that are just mind-boggling cosmetically. Like lighting up different colours, just crazy stuff. This kit is a little less crazy than some of the older ones."

"I like bigger drums for this band. I use a 26" kick, I like that big, travelling through mud, boomy sound. I've always really liked a big sound. But, when I'm at home I play an old '69 Ludwig, which has a 20" kick. It's kinda weird going back and forth."

"I like that really big, raunchy drum sound. I've always been into that. I use pretty much all ride cymbals for my cymbals. I've got a 24" A Medium Ride and I use a 21" Sweet Ride and sometimes a K Constantinople Ride and then a China as well. I use a Thrashformer as well on my left side. There's a couple of bells and whistles but it's all big and loud. That's what I like."

"I've always played Vic Firth sticks and DW 9000 Series hardware and pedals. I play DW drums occasionally, but I'm primarily an SJC player. If I don't have an SJC kit in some weird place they may bring a DW kit over."

Boys Like Girls debut album Love Drunk is out now.