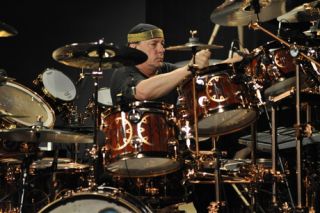 Here's the latest in our Christmas Best of the Blog treats, Neil Peart tells you all about putting together his recently released Hudson Music DVD. Below we have Neil's take on how he helped put the three-disc, seven-hour set together.

"My first instructional DVD with Rob Wallis and Paul Siegel of Hudson Music was called A Work in Progress, and the subject was composing drum parts and recording them. It was based around the making of Rush's Test For Echo album in 1995.

"Paul, Rob, and I enjoyed working together, and I felt it was a true collaboration, like the one I have with my bandmates, Alex and Geddy. In preparing for the shoot, the three of us exchanged dozens of notes and conversations, and while we were filming, we would get together between shots and discuss topics for discussion in the next one. Because it was filmed in the Catskill Mountains of New York State, in May, 1996, we had some nice outdoor settings for the parts where I was talking to the camera, and that made for a more 'scenic' program.

"Our second DVD together was Anatomy of a Drum Solo, in which we examined different approaches to composing and performing solos. It was based on a live performance from Frankfurt, Germany, during the band's Thirtieth Anniversary tour in 2004. Once again, we were putting it together at a studio in the Catskills, and were able to take advantage of nature as a backdrop to my narrative parts."

"Over the past five years, Rob and Paul and I discussed doing another project together, but we didn't have a 'theme' yet. A new member of the Hudson Music team, Joe Bergamini, joined our discussions, and had some interesting ideas about tracing my influences through the years, as expressed in different drum parts from older songs.

"However, I have never been very inspired by the idea of analyzing my past work, so it was hard for me to get excited about the idea. I still enjoy playing those older songs, but not talking about or demonstrating them. However, that association with playing the songs live suggested a truly major theme, one that had been central to my entire drumming career live performance.

"It was early 2010, just as the band was planning our Time Machine tour for that summer. I suggested to the Hudson boys that we could film my rehearsals, and discuss my preparations, then later film an entire show, with dedicated drum cameras. That could be a vehicle for a lot of worthwhile information things I had learned after 36 years of touring with Rush but it would also be a good way to look at the past.

"In preparing for the tour, I would be rehearsing a wide variety of songs from old and new recordings, and that would embrace Joe's suggestion give us plenty of 'demonstration footage' for breaking down those old drum parts. So, in April, 2010, the Hudson Music crew brought their cameras to film my rehearsals at Drum Channel, in Oxnard, California. A few months later, when we filmed the entire live show in Saratoga Springs, New York, on July 23, we also captured my pre-show warmup, along with some comments from me about that and about the show I was just about to go onstage and perform."

"So, by late 2010, when that first half of the Time Machine tour was over and I was at home again, we had all that material 'in the can' now we needed to tie it all together with some narration. We aimed to get that done in early 2011, and I wanted to do it outdoors again, as we had in the past, so we would have a 'natural' contrast with all the indoor footage of rehearsals and the show. However, it was January.

"I have lived in Southern California for eleven years, exploring the mountains, desert, and scenic coastal areas including Big Sur, which I thought of first. The giant redwood trees and spectacular coastline along the Pacific Ocean would be good backdrops all right, but the possibility of rain was worrying. Then I thought of Death Valley National Park, and there was no need to worry about rain there it gets less than two inches a year, and sometimes none.

"In addition, Death Valley is one of my favourite places in the world, offering unparalleled scenery and many different variations of its stark desert landscape could stand in front of various locations, and the Hudson guys could film me speaking about each song in the show, and answering some of Joe's questions.

"Because I had often travelled around Death Valley on my motorcycle, I wanted to include that element as well. While we moved to different places in the park, the crew filmed me riding on those spectacular roads. Director Greg McKean had a big effect on the whole show, but really came into his own in the Death Valley setting in his element of scenery and light. Greg chose the specific backgrounds and camera angles for each scene and in pursuit of that perfect shot, he didn't even mind if cameramen Dan, Jeff, Nate and I were sinking into the mud..."

"When that action-packed two-day shoot was done, we had gathered an amazing collection of material: majestic scenery, motorcycle action, footage of me rehearsing each of the songs on my own, and the entire Time Machine show captured by cameras on every facet of my performance.

"Those visual elements were brought together by the artistry of editor Phil Fallo, who presented the simple basics of 'the drummer drumming' when necessary, but also applied a more creative approach to the opening, closing, and interval episodes. The audio engineering by Sean McClintock also enhances the program in a big way, and here I will repeat the compliment I gave to Sean about the drum sound: 'It sounds like me, playing my drums'. I meant those simple words to express a great deal, because any drummer who has worked much in recording knows that such a perfect purity and fidelity is not so common. (In fact, sometimes you listen to a recording of yourself and think, 'That doesn't sound like me or my drums!')

"So, in conclusion, this project was inspiring to think about, and has been inspiring to work on. But the best result for me is that now it is inspiring to watch. I hope others will have the same feeling."

For more on Taking Center Stage, including how you can win a copy signed by Neil plus other Peart goodies, look out for the November issue of Rhythm.