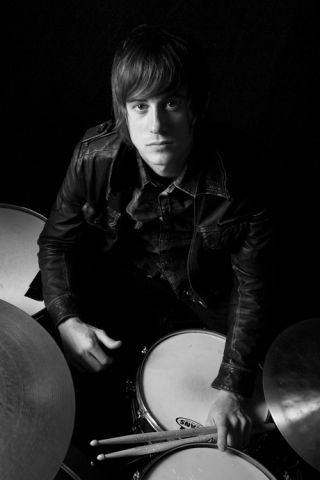 Love it or hate it, you can't deny that the X Factor is as massive as ever this year. Last weekend saw drama, heaps of tuneless crooning and even a spot of drumming. No, we don't mean Wagner's bongo playing, Ladyhawke sticksman Ben Kennedy was on hand to lay down some beats on Sunday's results show.

Ben was behind the kit as clean-cut former show winner Shayne Ward performed his new single. Here's what Ben had to say about the whole thing.

" We got to run the track three times which was helpful as there were no rehearsals. It was good to be back here, last time was when I performed with Girls Aloud, in 2008. There's just such a buzz about the place and X Factor in general at the moment. It is frowned upon throughout the industry, but it does give ordinary people the chance to become an established recording artist, a chance they probably would never have had.

"The performance with Shayne went well. The drums were on a high riser which was great to perform on. I think we all know the musicians mime, but it's a skill within itself. If you don't sync with what's on track, it looks terrible. So it was important to remember the groove and arrangement.

"Good luck to all the contestants left. Matt gets my vote!"

Take a look at the performance for yourself below.