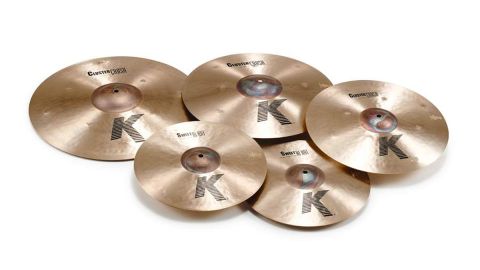 Zildjian has pulled it out the bag with these releases, continuing a streak for the most part with the Cluster Crashes and K Sweet hi-hats.

It’s been a successful couple of years for Zildjian, as it has unleashed consecutive augmentations to the K Series, aimed straight at the hearts and minds of contemporary players.

Starting with the revised K Custom Special Dry Series, we saw the Big Z reclaim some of the drier ground that was partially ignored during the line’s early tenure. Next up was 2018’s K Sweet series, taking the tonal character of the popular Sweet Ride and applying it to a whole set. This year’s NAMM show brought us plenty more from Zildjian’s Purple Patch - the head-turning FX Stacks, along with the cymbals we have here: K Cluster Crashes, a ‘standard’ sized set of 14" K Sweet hats (not included in the original Sweet launch) and the monstrous 22" Oriental Crash Of Doom.

Let’s start with the Cluster crashes. These K Series additions fall somewhere between a crash and something a little more effect-y available as 16", 18" and 20" models. The cymbals are extra thin, featuring unlathed bells and undergoing Zildjian’s regular K hammering process, but - most notably - they’ve been issued some additional ‘clustered’ hammer marks. Similarly to Sabian’s B8X Ballistic crash (albeit more subtle), these molehills disrupt the pattern of the cymbal’s soundwave, giving you an ‘alternative’ crash sound.

Next up are those hi-hats, and Zildjian are sticking with the thin design: at least for the top of the hats. Taking the thin/heavy combo that works so well on New Beats to a more extreme example, the cymbals contrast massively in weight with a thin on top, extra heavy on the bottom. These hats also feature the K hammering pattern, and like the others in the Sweet range includes unlathed bells.

Finally, we have the mighty 22" Crash Of Doom - which takes the dare of Dennis Chambers up a notch to give us a warped, beaten, wide-lathed animal of a crash that will out-size many people’s bass drums.

The Cluster crashes are noticeably thin as we put them on the stand, and while those funky hammer marks might suggest something extreme, these cymbals are surprising from the first strike. The lighter weight means that they rise and bloom very early in the dynamic range, so we don’t have to subject them to any more of a hammering than they’ve already had. And when they do crash, the resulting sound is more musical than we might have expected. There’s a trashy edge, with a lot of harmonics adding to this, and the unlathed bells provide an additional brightness, but these are by no means unconventional crashes. We found them to play perfectly nicely with our A Custom and Sabian AAX crashes.

The 16" sounds most conventional, while moving up the sizes yields a progressively drier sound. These cymbals are quick, musical and traditional enough to fit within a setup. It was a curious omission for Zildjian to not include a pair of 14" hi-hats in the original K Sweet range, but for those of us who like our hi-hat foot to sit in the usual position (without having to overlap our snare) will rejoice that the Sweets are now available in a regular size. The difference between weightings of the two cymbals is apparent immediately, with the bottom feeling comparatively beefy and thick next to its counterpart.

There’s a lot of stick and pedal definition to these hats, however, the dark sound is still maintained at the edge and on the bow. Likewise, we found that they get sloshy without becoming abrasive. While the bell might not be the default playing position for many of us, the Sweet’s - again, unlathed - offers the perfect cutting character for quick, biting ska-style off-beat barks.

We brace ourselves as we hoist the 22" Crash Of Doom onto our boom stand. This gigantic crash follows the template of it’s smaller (yet hardly small) 20" brother. It’s ugly from the off, looking gnarled and grizzled like it’s suffered at the hands of an angry cymbalsmith. And it has an tonal attitude to match. The sound is dry and muted - the perfect canvas for a stack cymbal, if you can find something to sit atop that bulbous bell or underneath the cymbal. It sort of works as an unconventional ride cymbal, but to push this twisted beast over the edge you really have to lay into it. When you do, you are rewarded with a deafening cacophonous crash, with gong-like overtones. There’s cutting through, and then there’s this! As a concept it’s definitely a curiosity, however, in reality, it will be an acquired taste that requires a beating to play as a crash. Get your ear protection ready.