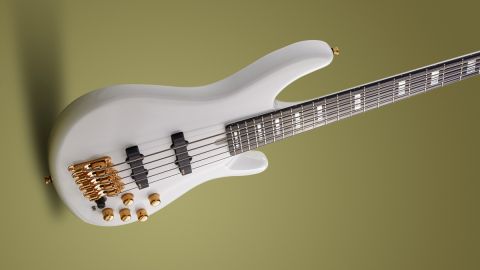 A fine bass with powerful sounds. Seek and audition!

Although this isn’t a new bass model as such, what we have here is the latest iteration of Nathan East’s signature Yamaha - and with Mr East still trailblazing around the globe with his basses in tow, he’s obviously very happy with them.

Nathan’s association with Yamaha goes back around 40 years, and this model is the summation of all the Yamaha instruments that have passed through his hands. So what does one of the busiest sidemen on the planet require from a bass? Let’s put his signature model under the microscope and take a look.

A gloss white finish and matching headstock, paired with gold hardware? The sleek image of this bass will rub a few players up the wrong way - but it’s a classic look. The body shape doesn’t break away from the norm too much, but there is a deep lower cutaway offering great access to the 24 frets. The sculpting and contouring to the rear provide a comfortable dip around the stomach area before sculpting outwards, thus reducing the overall body depth. As a through-neck bass, the continuity is quite linear, although the neck-to-body join isn’t especially shallow.

There is some headstock bias, and this isn’t the lightest instrument around, but at least it feels appropriately substantial. The dark ebony fingerboard comes fitted with abalone block position markers and a custom marker at the 12th fret, while the side of the neck sports white dot markers. The neck profile is full, but it’s not a struggle to get your fretting hand around it. Although the fingerboard is broad, the fine setup, comfortable action and standard 19mm string spacing make this a very enjoyable bass to play.

The hardware is high quality, as you would expect. Individual Yamaha monorail bridge saddles improve sustain and maintain tuning stability, while the gold machine heads come equipped with mother-of-pearl tuners - a classy touch. Truss-rod access comes via a deep recess at the neck/body join, and a recessed jack socket can be found on the side of the body below the strap button.

Bearing the signature of a player with technique and taste, you would expect the BBNEII to offer a wide palette of sounds... and it does. Its weight and dimensions mean that every nuance and string vibration is conveyed through the body. Hold it against you as you play and you will feel it, we assure you. Sustain is excellent and the overall resonance is impressive.

With the EQ set flat, the bass has a naturally woody fundamental, no doubt aided by its alder, maple and mahogany timbers. Panning between the pickups reveals a good selection of usable tones. The ebony fingerboard certainly contributes to the hard tone that seems to run through anything you play, but the EQ is flexible enough to add some light and shade. The mid-cut switch and mid-frequency selector are certainly a useful addition, should you require a ‘song’ sound and a pushed, upfront bass tone for extra projection.

With both boost and cut on offer, the EQ is impressively voiced with a powerful bottom end, strong mids and a tight, crisp treble response. Fingerstyle players will enjoy the versatility of the EQ, while rock fans will dig the hefty tone that can be coaxed from this beast, dressed though it is in the crispest of suits. On the downside, the low B string is a little flappy; given the 34” scale, we were hoping for a slightly tighter response so that the lower register notes would stand out and have some defined character. But if it works for the mighty East...

This bass can be heard on a million albums and YouTube clips, so evidence of its performance capabilities is easily obtained. One thing’s for sure, it’s adept at covering many musical requirements. We doubt many bassists would feel disappointed with it.

This is a bass that offers a lot for its upmarket price. It oozes class and has tones for virtually any musical setting. In terms of playability, Yamaha have drawn on East’s years of playing experience to deliver a splendid instrument. A new six-string headless signature version has just been unveiled at NAMM, so we look forward to seeing that model. For now, the BBNEII remains a serious force of its own.