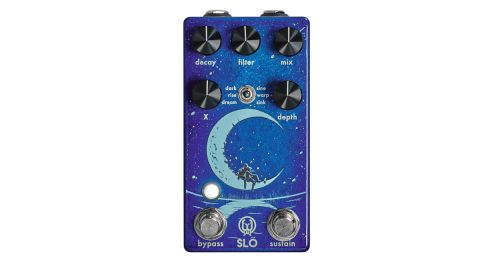 Ideal for players who want the option of deep ambience in their signal chain without using up a massive chunk of ’board space.

Walrus Audio is known for some pretty specialised pedals in its range and the new Slö follows in that tradition.

Described as a “Multi Texture Reverb [that] allows players to create lush, modulated, sleepy and ambient soundscapes”, it’s a pedal that features three different reverb algorithms, each designed to create an individual texture with the option of integrating modulation into the wash of reverb. Dark adds a lower octave with adjustable level into the reverb trail; Rise swells the reverb in over a user-set amount of time; and Dream is reverb that can be latched via a footswitch to deliver a constant pad of reverb.

Walrus has managed to keep the Slö’s chassis to a practical and compact size while still having two footswitches onboard. The main controls are nicely laid out and easily operated, but you have to hold a footswitch down to access some secondary functions such as choosing the modulation shape, and you need to use the Depth knob to set the modulation rate rather than its usual function of upping the modulation amount. That wave shape and rate are stored for the current algorithm until the next time they need to be modified.

The Dark algorithm’s lower octave is added in with the X knob, so if you keep that at minimum and the Decay low then you have a pretty standard reverb for everyday use. That extra octave, though, gives you plenty to play with, whether you’re after a unison guitar/bass sound with ambience, or you’re into making your reverb weighty and doom-laden. There’s plenty of tonal variation in the reverb tail via a Filter knob that sets how bright or dull it is and consequently how it beds into your sound, while the Decay knob sets the length of the delay tail up to long ambiences that just go on and on and...

However, while the pedal is capable of creating huge ambient soundscapes, it can also put a more subtle atmosphere around your tone via the Mix knob, which runs from completely dry to completely wet with a 50/50 mix point clearly marked at around two o’clock, giving you more travel to play with when dialling in the lighter mixes. Dialling in some modulation adds a dimensional aspect to the reverb tail, making it altogether more expansive. The sine wave is the most conventional and can offer chorus and rotary speaker-style effects, while the others each have their individual detuned take on things.

The Rise algorithm offers a longer basic reverb than Dark and you can set it to swell in at a suitable speed to match your playing. For both Dark and Rise, the Sustain footswitch will ramp up the decay time to maximum for a floaty bed of ambience for as long as you hold it down.

Whether you’re looking for a simple spring emulation with a minimal footprint or a do-everything behemoth with many reverb types, there’s plenty of choice out there. The Slö falls between these two extremes, its vibe being one of cherry picking some of the most interesting ‘altered’ reverbs you might find in one of those larger units and putting them into a practical, streamlined working format. It’s ideal for players who want the option of deep ambience in their signal chain without using up a massive chunk of ’board space. The range of sounds is surprisingly varied, from normal reverbs through to all of the huge altered ambiences, and the inspired addition of the Sustain footswitch adds a leftfield twist that offers cool performance options.