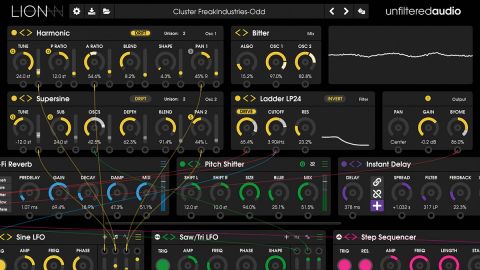 A powerful, individualistic, edgy synth for the adventurous sound designer, Lion is a welcome addition to the plugin zoo

Lion (VST/AU/AAX) is a momentous release for Unfiltered Audio, who is riding high on a five-year run of consistently excellent plugin effect releases. Having set themselves a very high architectural bar with the innovative likes of Sandman Pro, SpecOps and Byome, the pressure is on for the company’s first-ever synthesizer to not only sound great but also to set itself apart from the pack in terms of functionality.

Lion’s defining features, then, are the integration of UA’s freeform modulation system and the full Byome modular effects rack (see Byome inside), and – most importantly, it turns out – the remarkable diversity of its oscillators. There are two of them, both drawing on the same menu of 26 types, each one of which comes with its own contextual parameter set.

The usual analogue staples are represented in various configurations, from Simple Sine, Triangle, Saw and Square, to morphable waveform blends and self-contained unison Stacks (up to eight voices of Unison are available to each oscillator generally, too), all with independently tunable sub oscillators.

Vocal-style sounds can be elicited from Lion using the VOSIM granular oscillator type, while more conventional granular synthesis is on tap in the shape of the Pulsar oscillator, which uses a sine wave as its source signal.

Things get weird in the Experimental oscillator submenu, where a number of outlandish and intriguing techniques are brought into play. SumSyn deploys summation synthesis, in which three sine waves are phase modulated, waveshaped and mixed with a saw wave for spectrally complex results. XOR Squares blasts two XOR’d square waves through a sample rate reduction process; Circuit Bent involves bitwise mixing and bitcrushing; and Chaos is just mental.

Finally, three Noise oscillator types – Noise, Dust and Crackle – give plenty of options when it comes to filtering, shaping and randomising. Although some are less successful than others (Pulsar underachieves, for example), Lion’s oscillator types make for a very impressive set of signal generators, all told. But that’s not even the end of the story, as Lion’s mixer gives you eight algorithms with which to bring the two oscillators together, including ring modulation, bitwise operations, and sample and hold, the specifics of which are governed by a single contextual knob. Beyond the basic mixing algorithms, the Mixer provides another layer of sound sculpting, albeit one that’s usually quite unpredictable and aggressive in its delivery.

The oscillators feed into a resonant multimode filter with overdrive that models the Minimoog, Korg MS-20, Roland TB-303 and Oberheim Xpander, alongside UA’s own clean 12dB/octave modes. The topology Invert button is a fun inclusion, subtracting the filter’s wet output from the dry input when activated, for an alternative response.

If you’ve ever used an Unfiltered Audio plugin before, you’ll feel right at home with Lion’s modulation scheme, housed in the bottom lane of the interface. Macro (for unified multi-parameter control and automation), MIDI In (handling MIDI and MPE data streams) and Master ADSR (amp envelope) modules are always present, but after that, you can instantiate any combination you like of up to 13 polyphonic modulation sources from a sizeable list that takes in LFOs, envelopes, sequencers, randomisers, analysers and more.

Assignments are made by dragging virtual patch cables between ports, and there’s effectively no limit to the number of parameters a modulator can control or the number of modulators that can control a parameter. It’s no less fantastic a system here as it is in UA’s other plugins, and the polyphonic visualisation is excellent, with separate markers on the knob collars animating for every voice.

The only downside is that complicated patches demand a lot of horizontal scrolling to navigate, although modules can be collapsed to alleviate this to a degree.

Lion is quite unlike any other synth out there, and that’s actually more down to the oscillators than the Byome effects and modulation rack, their multiplicity of modes actively encouraging experimentation through quirky configuration and well-thought-out user-facing parameters. It must be said, though, that their ‘science lab’ approach does demand more judgment than is called for by most synths, and it’s easy to dial in harsh interactions and what sounds like internal clipping, as the very mixed bag of 594 factory presets (in a very rough-edged browser) makes apparent. Also, while it’s great that the GUI can be freely resized, the option to have it enlarge the canvas rather than just make everything bigger would be welcome, as the Byome and modulation racks necessitate a lot of scrolling.

An incredibly enjoyable, creatively liberating and truly unique synth with an appropriately bestial temperament, Lion is capable of everything from vicious basses and insanely modulated leads, to languid, expansive pads and abrasive textures, to hectic sequences and dense rhythm beds. Wild, in every sense

MusicRadar verdict: A powerful, individualistic, edgy synth for the adventurous sound designer, Lion is a welcome addition to the plugin zoo.

"It’s very exciting that Unfiltered Audio took their open modular approach to synthesis with their latest creation Lion. This synth will be a permanent tool in my audio arsenal."
Richard Devine, Plugin Alliance

"Lion is definitely very powerful and you can quickly patch together nearly anything you can think of.  I really like the long list of oscillator modes and the effects are very useful, especially if you love having options in the distortion department."
SoundBytes magazine