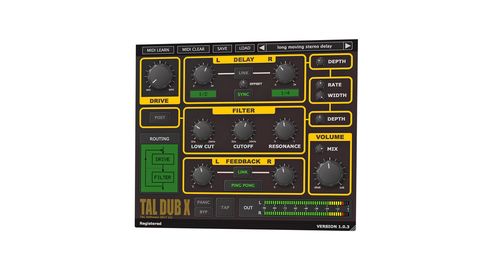 Bringing the free TAL-Dub up to modern spec and making modest improvements to its sound and workflow, TAL-Dub-X is an excellent feedback delay plugin.

Still available but no longer actively supported by developer Togu Audio Line (aka Patrick Kunz), the TAL-Dub (including TAL-Dub-II and TAL-Dub-III) delay plugin is a bona fide freeware classic that’s provided thrifty computer musicians the means to generate super-saturated feedback delay lines at no expense for over a decade.

The latest version, TAL-Dub-X (VST/AU/AAX), is a mash-up of all three freeware versions (mostly I and II) that sees the extremely bold addition of an all-new - but thoroughly reasonable - price tag. A number of architectural improvements have been made to justify this commercialisation, of course.

First and foremost for Mac-based producers, TAL-Dub-X is compatible with 64-bit hosts. That alone will put it back on the map for many, we’re sure. It also now comes in an AAX version for Pro Tools, and sports its clearest, most intuitive interface yet, complete with totally free resizing by dragging the bottom-right corner.

Beyond that and a general step up in sound quality, however, the functional changes are minimal. TAL-Dub-X is a relaunch and refresh rather than a transformative upgrade.

A virtual tape delay effect (not based on any particular hardware model), TAL-Dub-X features separate Delay time and Feedback controls for the left and right channels, with Link buttons for locking each pair together.

The Delay times can be collectively synced to host tempo or run unsynced at values up to 2 seconds (dial them in or hit the Tap tempo button), and the new Offset knob shifts the delay time of the channel towards which it’s turned by up to 2x for further stereo interest.

Two filters - 6dB/octave high-pass and resonant zero delay feedback low-pass - enable frequency-shaping of the delay line, and can be placed pre or post feedback, while the Ping Pong button cross-feeds left into right and vice versa when active. For more on the feedback circuit, see All washed up.

As the name suggests, TAL-Dub-X was clearly built with dub-style ‘infinite’ feedback delay workouts at the very top of the agenda. Cranking up one or both (linked or not) Feedback knobs loops the output back into the input, causing the delay taps to quickly build up to an increasingly smeared and distorted wash of sound that can be filtered (either within the loop or after it, depending on the status of the Post button) and modulated in real time (ideally with a MIDI controller assigned via the internal MIDI Learn system) in classic dub style. Importantly, the saturation circuit is in the loop too, so as well as filtering the feedback, you can also control the distortion, dirtying up the signal at lower levels and smashing it to bits higher up. It all adds up to a supremely twitchy feedback delay, and it’s only a shame the Drive can’t be LFO-modulated, too.

Central to the TAL-Dub-X sound is a saturation stage that no one could accuse of being understated, and that can now be overdriven independent of input level. For the first half of its travel, the Drive knob applies warmth, then heat; after that, you’re in gloriously full-on crunch territory.

A single LFO is onboard, delivering triangle-wave modulation of filter cutoff, delay times and panning (misleadingly named Width), each with its own depth control. As this is an analogue emulation, modulating the delay times also wobbles the pitch, for faux analogue drift or as an overt effect.

Ultimately, TAL-Dub-X’s new features aren’t in any way gamechanging in their real-world impact, and we’re disappointed in the unaddressed limitations of the LFO (it can’t be synced, and we’d prefer a separate one for each parameter). The saturation stage and low-pass filter do sound better than ever, though.

So, given that the free versions of TAL-Dub I, II and III are still downloadable, is TAL-Dub-X worth the low asking price? Even if you’re not an up-to-date Mac and/or Pro Tools user (in which case it’s your only option), as the best sounding edition of TAL’s edgy, fun and hugely productive delay plugin yet, we’d say so, yes.