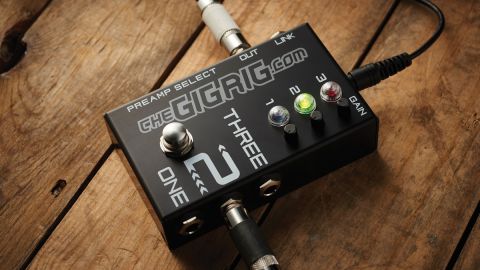 With more and more players using multiple instruments at a gig, typically into the same pedalboard/amp set, aside from the usual differences in feel and set-up there’s the issue of the often vastly different outputs from, for example, a vintage spec Strat or a much pokier ‘rock’ Les Paul.

Well, the pedalboard gurus at TheGigRig have been listening and have come up with an answer: the Three2one. It’s a rather nifty stomp box that offers three inputs each with their own dedicated level control and/or active buffer if you want a pristine and clean signal.

It’s deceptively simple: plug in your guitars to the side-mounted chassis jacks, and select which you want to hear - if you have just two instruments plugged in the Three2one will ignore the third input - via the Optokick footswitch that, as the name suggests, uses light instead of “potentially unreliable” mechanical switching.

Without the preamp selected (via a trio of small push switches on the opposite
side of the housing to those inputs) the in/out signal path remains true bypass. The preamp itself internally doubles the voltage from nine to 18 volts to increase headroom. This means the inputs can deal with a wide range of outputs, from guitars with active pickups, or line level outputs from other devices.

More flexibility comes with the Special Functions feature that changes the role of that Optokick footswitch from stepping through the three inputs (Red), adding a fourth mute selection (Green) and finally, an input blend mode - ideal, for example, if you’re using a dual pickup guitar or want to get a stereo guitar, like an ES-345, summed correctly into the single mono output. You can also con figure the output drivers via four internal DIP switches.

Using the Three2one to switch from lap-steel to Les Paul is just one example of how it can help; mixing the stereo (passive) output of a split pickup on a seven-string classical (in blend mode) - or more typically a dual pickup electro - is just another.

It also saved our bacon when testing an ES-345 with a stereo Varitone. Another plus is the ability to switch between passive and active mode: that slight treble lift of the active makes for a great clean ‘DI’d’ funk Strat voice, for example, that contrasts the passive true bypass sound which might suit a dirtier gained Strat tone. You choose.

Having three electrics all plugged in for a gig might be stretching it a little far as although the Three2one easily balances our single coil Tele with a Strat (in active mode) and a Les Paul, the potential for lead snaggle is vast. Maybe a future version could configure, via a single input, the different gain/preamp sections so we could simply hit our tuner mute, swap guitars as normal, then switch to the 1, 2 or 3 gain/ preamp stage to suit the guitar.

Those using multi-instruments, not to mention two (or three) pickups on an acoustic, will benefit from this handy level balancer.