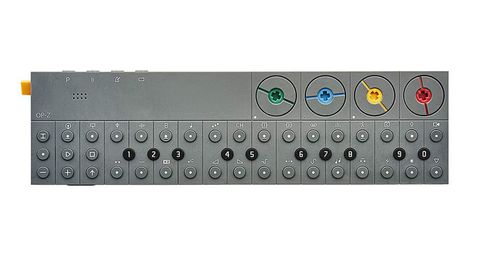 Unique, inspirational and a lot of fun - the OP-Z looks set to be a future cult classic, despite a few design quirks and limitations.

Teenage Engineer first showed us the OP-Z almost two years ago and we’ve had a steady stream of demos, updates and teasers since then.

To be completely honest though, until very recently - ie the day our review unit arrived - we would have struggled to answer had somebody asked me to explain what the OP-Z actually is. It doesn’t help that the hardware itself gives very few clues as to its function. Its sleek, minimal form is adorned with buttons and rotaries labelled with often rather cryptic icons. Were you to hand someone an OP-Z without context, it’s likely they wouldn’t know whether they’re supposed to use it to make music, turn on the TV or try to make a phone call. Which all begs the question, what actually is the OP-Z? A synth? A sampler? An audio-visual sequencer? The answer is, to some extent at least, all of the above.

At its core the OP-Z has a 16-track, 16-step sequencer. Of those tracks, eight generate audio while the other eight are used for effect manipulation and external control. The audio tracks are divided into two groups, with the first four set up as sample-based drum tracks and the latter as melodic instruments that can each make use of a variety of synthesis engines. Every audio track has two adjustable sound-specific parameters, along with a resonant low/high-pass filter, four-stage amp envelope, a multimode LFO, two effect sends, and pan and level controls.

Drum tracks can each load a sound pack containing up to 24 samples. Each drum track is two-note polyphonic, so two sounds can be sequenced on each step, albeit sharing parameter values. For all four drum tracks, the two parameter controls adjust pitch and playback direction. The synth channels can each load one of nine sound engines, including a filtered saw sound, digital string synthesis, a synth piano, sub-heavy bass and PCM sample player (some of these will be familiar to users of the OP-1).

The tonal quality is fairly digital sounding, but that shouldn’t be taken as derogatory. They bring to mind ’90s-style house or classic electro, and paired with the filter and effects, each engine sounds great. For each engine, the two parameter controls alter a different aspect of the oscillator setup, and while they’re not particularly deep sound design tools, coupled with the filter, envelope and LFO there’s enough sound shaping on offer to keep the OP-Z feeling limited. Of the remaining tracks, the first two are send effect slots, each with a choice of four digital processors (crush, overdrive, delay and reverb).

The next track is a tape-style effect, which uses an always-active recording buffer to let users grab chunks of the master output and play them back sped-up, slowed down or looped. Next is a master section: here the output of all the melodic tracks can be transposed, to create momentary key changes or longer sequenced melodic progressions. This track can also be used to apply master chorus, overdrive and filter effects.

Next is a performance track, which makes use of the OP-Z’s punch-in effects. These are largely beat-sync’d effects, which include loopers, beat rolls, filter sweeps, pitch ramps and randomisation effects. The punch-in effects can be applied to any audio track individually, or to multiple tracks in the performance mode. One particularly handy performance feature is the ability to apply effects to the drum and melodic sections separately.

The final three tracks comprise the visual and lighting sequencers [see boxout] and a slightly mysterious Module track. This will be used to interact with forthcoming, yet to be revealed expansion modules. For the time being, it also handles MIDI setup for the device. Like much of the OP-Z’s design, the sequencing workflow is effectively a scaled-up version of that of the Pocket Operator range. As there, we get 16 push buttons - running across the length of the hardware - used to sequence hits or notes. There’s also a two-octave button keyboard, which can be used for live recording melodies and patterns.

Two of the OP-Z’s sequencer tracks are dedicated to visual sequencing. The first is a light show sequencer, which uses the DMX protocol so requires a DMX interface connected via the OP-Z’s USB connection. The other channel sequences visuals. This works in two modes, both accessible via the companion app. The first is Photomatic, which sequences photos either from the device’s Camera Roll or its camera. The second mode is a motion graphics sequencer, which can control 2D and 3D animations created using the Unity engine. A selection of motion graphics come supplied with the app (pictured), but user-created packs can also be imported via iTunes. Visuals display on the iOS screen, but a secondary screen can be added using an HDMI adapter. In both modes, the sequencer works as it does for the audio elements - allowing for visual changes to be added to steps, and extra effects to be sequenced or added on the fly.

There’s more depth to the sequencer than initially meets the eye though. Along with notes and sample hits, all sound parameters and effects can be automated on a step-by-step basis. Because the send, master and performance sections appear on their own channels, these can all be sequenced too. The velocity and timing of each note can be adjusted, and each track has a menu for adjusting note length, live recording quantisation and portamento. Drum hits can be assigned a selection of re-trigger styles, while each melodic track can be set to play in monophonic, poly or legato modes. While patterns are limited to a maximum of 16 steps, there’s a timing diving function that can be used to make tracks run more slowly than the master tempo, effectively stretching the 16 steps out over a duration far longer than a single bar. Step lengths and timings can be adjusted for each track individually, which allows for the creation of polyrhythmic or evolving patterns.

The OP-Z has one final sequencing trick up its sleeve in the form of Step Components. These are automation conditions that can be applied each sequencer step, with functionality that sits somewhere between the punch-in effects and Elektron-style ‘trig conditions’. They can apply re-triggers, beat rolls and pitch or parameter sweeps, but can also be set up to transpose notes, apply timing shifts or mess with pre-programmed automation. It’s a deep and creative system that’s a lot of fun to experiment with. This experimentation is key to the OP-Z workflow. As mentioned, the OP-Z’s interface can be cryptic, and while it all makes logical sense once you know your way around, there’s a lot of multi-button presses involved in making most edits. Without a screen it’s difficult to keep track of things using hardware alone.

Fortunately, TE have created a free control app (currently iOS-only, but forthcoming for Android too). This runs via Bluetooth, and gives full visualisation of the sequencer, sound engines and effects (using some great eye-catching graphics), and also acts as a screen for the visual sequencers. It’s really nicely designed, and helps to clarify and open up the OP-Z’s capabilities – to the extent that I’d be wary of recommending the OP-Z to anyone without the ability to run the companion app.

Technically there’s nothing you can’t do with the hardware alone, and there’s something to be said for relying more on your ears than parameter data, but functions like making LFO assignments or rearranging Step Components would prove very tough without access to a screen. The OP-Z hardware itself features a rechargeable (and user-replaceable) battery, which is charged using the included USB-C to USB 3 connector.

The OP-Z is quick to charge, but battery life when using the control app is limited to around 4-6 hours, which is adequate, if not ideal - were we to perform live with this, we’d probably keep it connected to a computer, just in case. This same USB connection can be used for MIDI sync/control. In Disk Mode, you can drag and drop sample packs (in .aiff format) for use with drum tracks. Our other slight bugbear with the OP-Z is its limited audio export options. You can ‘bounce’ a pattern to save it as audio to the OP-Z’s memory, but these are limited to a maximum of a length of 10 seconds and a maximum of five bounces. It would be nice to have more options here, such as the ability to bounce drum and melodic parts separately, or whether or not master effects are applied.

Given that audio output is limited to a single 3.5mm stereo jack, it means that transferring individual parts into a DAW for further mixing can be a little cumbersome. The final element of the OP-Z hardware is a built-in mic. This sits on the end of the hardware and, thanks to a built-in accelerometer, only becomes active when you lift the OP-Z to your mouth like a mic. The mic input can be processed via the send effects; a cool touch, but it’s strange that it doesn’t allow for sampling or recording. Apparently TE has rethought the OP-Z significantly over the past year, so perhaps the mic played a bigger role in an earlier version of the OS? Potentially it could play more of a role via future firmware updates or expansion modules - it’d be great to see the vocoder engine from the PO-35 added.

Minor bugbears aside, there’s a lot we really like about the OP-Z. It’s creative and unique, and while some might bemoan the reliance on an iOS app, we really enjoy the workflow between the two devices. From a performance perspective, coupling the visual and audio elements is really inspiring. The OP-Z is unlike anything else on the market right now. TE might have another cult classic on its hands here.