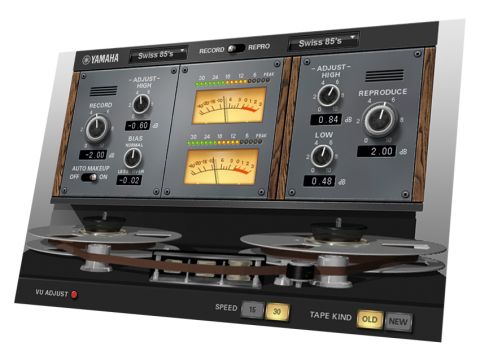 An intriguing prospect that ultimately fails to excite.

Despite its longstanding place at the commercial leading-edge of digital sound technology, Yamaha is viewed primarily as a hardware company.

The reality of course is that inside all its digital synths, mixers and effects is a considerable amount of signal processing software. It shouldn't be forgotten that Yamaha also owns Steinberg, makers of Cubase, Wavelab and range of software instruments.

This brings us to the Yamaha Vintage Plug-in Collection - a series of plug-in bundles consisting of the Vintage Channel Strip, Vintage Open Deck and Vintage Stomp Pack - which comes hot on the heels of the Steinberg RND Portico products endorsed by audio legend Rupert Neve (and with premium prices to match).

All of these are based on Yamaha's Virtual Circuit Modelling (VCM) technology and come in both VST2, VST3 and AU flavours. A USB e-Licenser dongle is required (but not included).

VCM and the 'Vintage' Sound

Yamaha developed 'Virtual Circuit Modelling' (VCM) technology as an offshoot of its research into physical modelling nearly 20 years ago. The principle behind VCM is that the circuit - rather than just the resulting sound - is modelled in order to emulate a given hardware device.

Interestingly, this isn't the first time these Yamaha plug-ins have seen the light of day. In 2005 Yamaha offered users of their DM-range of mixers the ability to update the onboard processing with the AE011 Channel Strip, AE021 Master Strip and AE051 Vintage Stomp Box packages - all looking very similar to those under review.

We weren't able to do a side-by-side comparison of the old and new, but Yamaha have made no play of suggesting that the current plugs are any better than those on their digital mixers. This could lead to confusion, but does explain the pricing - and raises questions about the nature of 'vintage' plugs, the quality of their emulation, and what we should expect in visual, sonic and functional terms.

Reeling in the years

The Vintage Open Deck plug-in is a tape-recording and playback emulator that clearly doffs its hat to old Ampex and Studer analogue machines.

The plug-in divides processing into Recording and Reproduction sections, with one of the four machine models selectable independently for each. Controls are provided for high and low frequency gain, bias and recording/playback level as well as tape speed and type (old or new). We were particularly excited about trying out this tape emulator plug-in.

The best word to describe Open Deck is 'polite'. If you attempt to push the plug-in into obvious tape saturation territory the transition isn't particularly satisfying.

Unlike the Universal Audio Studer A800 plug-in, which enables you to conjure-up a wide range of tones, and with some very nice detail in sonics as the input level is pushed up, Open Deck left us a little cold. There's little doubt that using one on every channel would have a positive effect on your mixes, but we'd have liked more in the way of tonal-shaping possibilities.

Ultimately, Yamaha's new plug-ins are all competent, without offering anything radically different from other more interesting competing products.

We might feel differently if they were half the price, but the truth is that both Universal Audio and Waves, to name but two, provide Yamaha with some very strong competition. Surprisingly also, there appear to be no built-in factory presets. If only to get you started, presets are a useful inclusion, and this only reinforces the impression that little effort has gone into the 'added-value' aspect of these plug-ins.

On the plus side however, no additional hardware is required and the CPU load in general is quite low, enabling you to use many plug-ins concurrently. We'd encourage you try out the downloadable demos on the Steinberg website and decide for yourself if they help resurrect the 'vintage sound'.