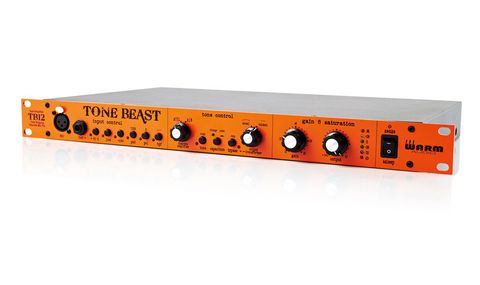 With a large variety of tones and multiple input types, it expands your possibilities at a bargain price.

USA-based Warm Audio is a relative newcomer to the preamp market. When we reviewed its debut offering, the Warm Audio WA12, back in August, we were impressed by the quality of the unit and the sound it produced. The TB12 is in effect its big brother; it does everything the WA12 can do and a whole lot more.

On the front panel there is an XLR socket for microphones and a 1/4-inch jack socket for guitars and basses. On the back is another XLR mic input (it's a parallel of the front panel) and another 1/4-inch jack socket that handles line level. Then there are insert TRS sockets where you could plug in an EQ or compressor, and XLR and TRS output sockets. It's pretty comprehensive and easy to connect into most set-ups.

Next comes the Tone section, with a rotary switch to select op amps. There are two different op amps: the x731, which has a more coloured sound, and the x18, which is cleaner. Next to that is the Tone switch, which changes input impedance from 600 ohms to 150 ohms, followed by a switch that selects either tantalum (labelled vintage) or electrolytic (labelled clean) capacitors.

After that is a switch to bypass the output transformers. This can be selected with the rotary to its right. Last but not least, you get indented gain and output level controls.

It's all in the tone

Starting with an AKG 414 mic, we recorded an acoustic guitar using the x731 op amp, with the tone button in, vintage capacitors and the steel output transformer. This gave a very warm tone with a noticeable shelving of the highs and lows and a thicker, darker mid range.

We then switched to the more transparent x18 op amp with the tone button out, clean capacitors and the nickel transformer. What a difference - there were more highs, more transients and less of those warmer low-to-middle tones.

The tone controls work over all the inputs so we tried electric guitar and bass through the DI input using the same settings and also an old RCA ribbon mic for various other instruments. The results were fascinating.

Although we're used to hearing this type of variation from unit to unit, it's very rare to have all the options in one box. How you perceive the changes are quite source-dependant, but certainly those op amps and the transformers make the biggest differences. Add to that the gain and output level controls and you can drive the pre hard, which in turn increases the colouration.

It would be very hard to say one setting was better than another; every sound we got from the TB12 was very useable. Those variations in tone are, if anything, more marked when you hear the instrument in balance in the track.

The beauty of it is that once you have found the setting that suits what you are doing, you're going to do less EQing and potentially use less compression than normal, enabling each individual sound to breathe a bit more in the mix.

Add to that the flexibility of a line, mic and DI input and the TB12 starts to feel a bit like the Swiss Army Knife of preamps. If you have a limited range of microphones, the Tone Beast will enable you to get a lot more sounds from them, and that flexibility is worth its weight in gold, or at least cash.

When you think of it as two or more mic pres, plus a high-quality DI box and line source, the Tone Beast reveals itself as a real bargain. Highly recommended.