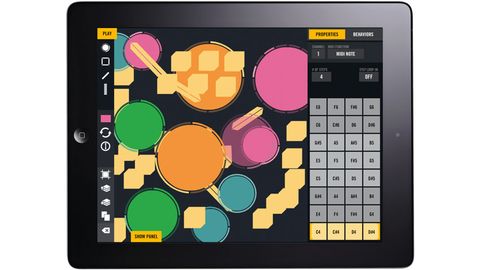 Beatsurfing is a deceptively powerful controller - very straightforward to use, yet capable of great depth and artistic inspiration.

A MIDI controller app for iPad, Beatsurfing enables you to create your own control surfaces by laying out and configuring as many of its four Objects - Lines, Circles, Polygons and Faders - as you can fit on the screen.

The first three send MIDI notes in various ways - including 'stepped', with each tap triggering the next note in a chain - while Faders transmit pitchbend data and the full 0-127 range of MIDI CCs.

Circles and polygons can chain up to 16 and eight notes respectively; lines and polygons (the latter being collections of lines) can have 'secondary' directionally-triggered notes assigned for bidirectional strumming. 'Behaviours' can also be set up between elements, causing them to interact with each other, and multiple controllers can be layered to create more complex triggering structures, called Swarms.

Editing a Beatsurfing patch is easy and intuitive, and done entirely within the app itself, rather than using a Mac or PC-hosted editor. Connection to a DAW or MIDI instrument is made over WiFi or via a physical connection, and compatible apps running in the background on the same iPad can be triggered and controlled through CoreMIDI - we had a lot of fun with the amazing Animoog in particular.

Despite the name, Beatsurfing is at its best controlling synths, melodic sampler patches and glitchy percussion. For conventional drums, it kind of sucks - playing beats in via a touchscreen might be fun for a few minutes, but in sensible musical terms, the results are of little use unless you have something intentionally atemporal in mind.

What's really needed is an internal sequencer of some sort, even if it might detract slightly from the app's real-time performance philosophy.