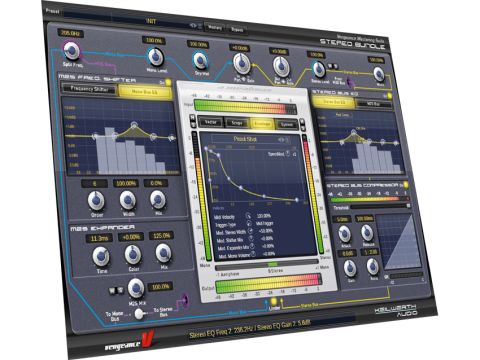 From subtle enhancement to ultra-wide weirdness, this plug-in caters for all stereo situations.

Stereo placement is a crucial part of the mixing process. With the right tools and a bit of know-how you can carve out a special place for every element in the sound stage.

The ﬁfth one - aka the Stereo Bundle, combines all the previous plugs together and adds several extra features including EQs, an envelope trigger and a couple dynamics processors.

The installation requires a Synchrosoft dongle, so budget for that if you don't already own one.

When you open the Stereo Bundle the ﬁrst thing you'll notice is that there's a lot of information to take in from the GUI.

Aside from all the controls there's also the signal path, which isn't immediately obvious. This deﬁnitely needs to be fully understood to get a good idea of what's happening to your audio when it passes through.

Initially the signal gets divided into its mono and stereo components. The blue line signiﬁ es the mono buss and heads left, while the yellow arrows take the stereo buss over to the right. This split allows you to make a stereo signal sound wider by lowering the volume of the mono portion of the signal while keeping the stereo information intact or vice versa for reducing the stereo image.

The ﬁrst processor on the mono chain is the M2S (mono to stereo) splitter. This allows you to split the signal at any point in the frequency spectrum. You can then leave the lower part unprocessed in hard mono, and route the upper part to the M2S Frequency shifter.

The shifter can make a mono signal into a stereo one by employing a series of comb ﬁlters. You can specify between two and ten points (or ﬁlters) that are graphically represented on the display. These are panned in opposing directions to create the illusion of width.

The three simple controls are easy to use and can dial in results ranging from subtle width to some seriously over-the-top spread.

At this point you can also take advantage of a ﬁve-band EQ to tweak these newly spread frequencies, and then it's off to the M2S Expander. This can also make mono signals stereo and uses copies with slightly different delay times (up to 10ms long) to create the illusion.

The manual assuredly claims this process is 100% phase-free and mono compatible, and in our tests it held up and collapsed nice and tight.

Remember that if the signal is already in stereo, then the stereo portion can be levelled and processed separately using its own ﬁve-band EQ as well, before both signals are routed into the stereo buss compressor.

The analyser section sits in the middle of the GUI. You can switch between the Vector-style stereo analyser, and the scope, which displays the waveform and frequency action.

There is a little bit of a learning curve, but once you acquaint yourself with the signal path, it becomes a lot easier to keep track of what your doing with your audio.

For instant gratiﬁcation, hit the preset list. They show off the depth of what it can offer and it comes loaded with banks for mastering, instruments, envelope triggers and special FX. These are geared towards dance music production, and tend to be quite dramatic when applied, you should immediately hear the difference in the sound stage.

In terms of sound quality, as more of the M2S processing is added, there is tendency for things to get brighter. The shifter tends to make things sound a little more resonant around the frequencies it's boosting, while the colour parameter on the expander also increases the brightness.

In fact, there's a lot of scope for totally changing the tone of the signal along with the stereo placement, so we found that we needed to stay objective with the mix and not go too heavy, otherwise we'd need to EQ.

At the most extreme settings, it can make real-world acoustic spaces sound unnatural, like they are hanging around in an intangible area and you cant quite put your ﬁnger on where they are located.

On the other hand, this ability to push it too far is great for in-your-face special effects and crazy sound design applications.