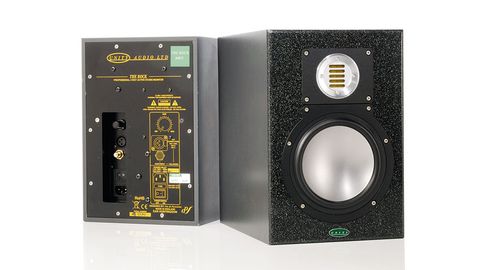 An excellent pair of monitors that tell you the truth right across the audio spectrum.

Unity Audio has built its reputation on distributing some very excellent high-end audio brands including Chandler, Empirical Labs, Telefunken and Sound Toys. Creating its own range of monitors was a bold step considering what rarefied company they would be obliged to keep, so it's hardly surprising that it went to several highly respected professionals to put the project together.

Tim di Paravicini of Esoteric Audio Research designed the amplifier section, cabinet design was by acoustician Kevin van Green and the drivers are made by German loudspeaker manufacturers ELAC. The result was a great pair of monitors which picked up a good few accolades including a Future Music Platinum award.

"Instead of rolling off at 50Hz, the low end now gets to its -3dB point at 33Hz, a significant difference particularly in a monitor of this size"

After the Rock came the Boulder, Unity's three-way midfield monitor, which utilised the same amplifiers. During development of the Boulder Unity discovered that by altering the feedback loop in the LF amp it got a significant extension in the bass frequencies so it tried that mod in the Rock. Liking what it heard the MK2 was born. So, instead of rolling off at 50Hz, the low end now gets to its -3dB point at 33Hz, a significant difference particularly in a monitor of this size.

The rest of the Rock is as it was. The sealed cabinet (no bass ports here) is made of birch plywood with the front baffle made of Corian. Internal bracing keeps the cabinet as rigid as possible. The 50kHz ribbon tweeter is enclosed in a custom-built metal grille and the bass driver is made from a rigid pulp fibre cone covered with 0.2mm aluminium foil.

Monitor designs seem to be becoming ever more complex. With the advent of readily available DSP chips it seems that more and more manufacturers are adding control circuits into their designs and every new model is bristling with knobs and dipswitches and, in some cases, computer ports. Unity has gone very much the other way and bless the firm for it. On the back of the Rock are a power socket, audio inputs and a volume knob which you should simply turn up full and never touch again.

"The sound is superb. Well balanced with excellent stereo imaging and enough detail to satisfy the most demanding recording and mixing jobs"

The sound is superb. Well balanced with excellent stereo imaging and enough detail to satisfy the most demanding recording and mixing jobs. The quality of the amplification coupled with the unported cabinet design means that transient response is fast right the way down to the very low end. And what a low end. The promised bass extension really delivers and the detail in the lower octaves means you won't be left guessing what is going on in the bass end of your music.

Unity's design ethos is straightforward. It built it to sound like this so you either like it or you don't. It's not arrogance but confidence because in an audio world governed by indecision (mixing in 'stems' being a classic example) sometimes we need to stand up and say, 'It's like that because it's how it is supposed to be'. The Rocks are a classic example of just that. Professionals doing what they do best and not a committee in sight.

Good studio monitors should never flatter and the Rocks don't. If you have more work to do they will tell you and if you've got it right they will have you dancing round the room.