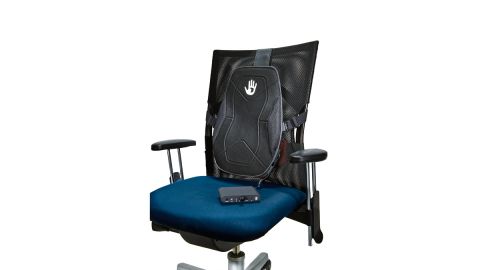 A unique and genuinely useful monitoring tool - a must-try for Dance producers.

SubPac is a tactile bass monitoring system, which - in contrast to a standard sub, which works by creating vibrations in the air that are picked up by the ear - transmits 'sound' entirely via physical contact, using transducers to transmit low-frequency information directly into the listener's body.

It is currently available in two forms - the M1, a backpack device for portable use and DJing, and the S2, the chair- mounted version we have on test here.

The S2 hardware itself comes in the form of a sleek, black pad, roughly half a metre high and around 5cm thick. It's slightly contoured and fairly comfortable to lean back against, and comes with an adjustable strap for fastening to a chair.

Attached to the pad is a control box with 3.5mm jack headphone out and line in ports (although it can also stream audio via Bluetooth), power socket, on/off switch, battery indicator and a central Intensity dial for setting the SubPac level. The control unit contains a rechargeable battery which apparently has a six hour life per charge.

In use the SubPac is a fascinating and unique tool. The physical way it translates bass is equivalent to hearing music on a powerful club sound system and - particularly for Dance music producers - the ability to replicate this effect at low volume is something of a revelation.

With your back in full contact with the unit it really helps to add clarity to the lower frequencies that are generally lost when working on headphones or a modest monitoring set-up. After getting used to the effect for a while, we began to find it very useful for applications like adjusting the interplay between kicks and basslines, or identifying messy sub frequencies that we'd usually need to rely on a spectral analyser to identify.

There are a few caveats to using the SubPac as a monitoring tool. For one thing, it's only really designed to be used with headphones. While it is possible to use the device with the control box's output connected to a set of nearfield monitors, there's no functionality for compensating for delays or phase issues that might arise from the combination of using room-reliant monitors and the entirely tactile SubPac. It's still entirely usable in this state, but it's not the most refined monitoring system.

Also, as a studio tool at least, the SubPac shouldn't be thought of as a plug-and-play device. As with any new monitoring set-up, it requires a decent amount of cross-referencing and getting used to before you can really trust it as a mixing tool.

Use a track you're familiar with hearing via a club system or decent sub in order to calibrate the SubPac. The easily accessible Intensity control is a little misleading for studio use too; at first it's tempting to use it to 'dial in' bass or cut back the SubPac's effects if it's getting a little tiring, but to do so is rather counter-intuitive for mixing purposes.

The Intensity is more of a 'set once and leave' parameter, used for levelling the SubPac to suit your own body, room and monitoring system.

In terms of connections and controls, there are a few features we'd like to see added to aid studio use, but we're told a 'pro' version is actually in the works. None of this detracts from the fact that it is a useful and somewhat revolutionary tool.

It's not the be-all- and-end-all of bass monitoring but, like a good pair of headphones, we can see it becoming an integral part of the mixing process for many producers.