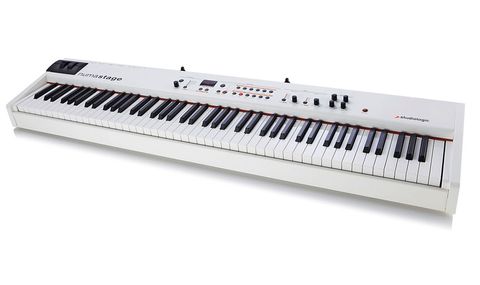 It's very portable with good basic sounds/effects and a handy MIDI section. Definitely worth a look!

Carrying 88-note weighted stage pianos about is not easy, but thankfully Studiologic's Numa Stage weighs only 13kg (28lbs). It's easy enough for one person to pick up and the white case definitely stands out. The controls and general build feels sturdy too.

The Numa features the Fatar TP/100LR-3C weighted keybed and it's nicely balanced for piano playing, though it reacts a little slowly to fast playing and thus it's not ideal for organ and clav. Nonetheless, it's very playable and a lot better than the weighted keybed in the Korg SV1, which gave this writer severe wrist ache!

There's no aftertouch but there are several preset velocity curves, and press the 'Fatar Touch' button and the Stage creates a custom curve from a minute's worth of your playing, which can then be stored.

To the far left of the control panel are two chunky wheels for pitch, mod and FX control duties (rotary speed/trem etc). These feel good, though they are a long reach away. Next up is the MIDI section that can be switched on/off with its dedicated button, much like the External section on my Nord Stage 2. This enables you to quickly switch the sound on and off on an external MIDI device for quick layering.

The MIDI section transmits program change, LSB Bank, MSB Bank, channel and octave, plus it has a dedicated volume control for dialling in the desired level on your external gear. There are also two MIDI zones (A and B) so you can control two different sounds on two different MIDI channels in a layer/split scenario.

The splits and layers are simple to set up. Press Split and the last activated sound goes to the top of the split; then to select the lower sound, press Split again and the relevant sound button. To set the split point, press Function then Point and hit a note. Finally, to layer sounds, just press any two sound buttons together, then use the balance dial for mixing upper/lower parts in your layer or split.

Sound-wise, there are 50 user memories onboard but just 12 factory sounds. The concert grand sounds particularly good and both pianos have modelled soundboard/string noise/ sympathetic resonance, which adds to the authenticity.

The slight downside is the Stage Piano sample can get a little harsh when you lay into it and its initial attack seems a little vague, but both pianos are decent enough for most live and studio duties.

The remaining ten sounds include a Rhodes sample that sounds authentic when played softly but loses attack when you lay into it, a good Clavinet, a Wurli that sounds nice especially with tremolo, a good pad (and a not-so-good pad also!) and some usable organs. There's also an upright bass and an electric bass, which are handy, though they're fairly pedestrian.

The onboard reverb/delay and modulation effects help to bring the sounds to life, though there's not much in the way of effect/sound editing and the organ really misses a vibrato/ chorus/overdrive effect, though the rotary simulation is fine. Lastly, there's a stereo audio input for routing other gear through the Stage and a handy EQ for tweaking the brightness/bass, though there's no mid/sweep control.

If you're a gigging keyboardist looking for a portable 88-note board that has useful MIDI control features, with a decent weighted keybed and a handful (literally!) of staple sounds, then the Numa Stage is definitely worth checking out. It's sensibly priced and its simplicity allows you to concentrate on the important thing - the performance!