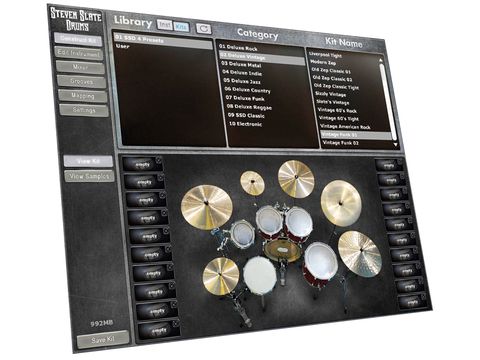 An excellent drum instrument with stunning sounds and plenty of scope for sonic manipulation.

Steven Slate is all over the pro audio world these days, what with his high end analogue gear, the excellent Slate Digital plug-ins and his stunning Trigger drum replacement processor.

It's hard to imagine how he found the time to record the thousands of new samples for SSD4. Both Trigger and SSD3 have found great favour with industry professionals over the past few years so he could be excused for resting on his laurels. Fortunately for us he hasn't and instead has pushed on with a whole raft of new features in SSD4.

"After launching it for the first time we were programming a drum track within five minutes having already built our own custom kit."

For those of you familiar with SSD3 you will know that until now Slate has used the excellent Kontakt player. Instead of staying with that SSD4 features a new player based around the Trigger engine.

This gives you all the options you would expect, load a preset kit, build your own, mix them, assign to discrete outputs, customise MIDI maps, load MIDI grooves and even load your own samples. So let's walk through.

Once launched you will see a list of buttons on the left. The first of these, 'Construct Kit' gives you two options in the Library Browser, to either load a preset kit or just individual kit pieces.

The new kits are the 'Deluxe' versions and come in categories such as rock, vintage, funk, and so on, and then you get SSD Classic, which are all the ones we know from SSD3 and finally, a bit of a departure for Slate, electronic kits. Mr Slate has enlisted producer Griffin Boice to provide this set, and judging by the sound of them it was a wise choice.

If the very broad selection of presets doesn't give you what you want then you can always build the kit from scratch. As it's just drag and drop, this is very simple. You can choose your view of the drums, either as a kit or a series of cells, but either way you just drag onto the position you want.

Having chosen your kit you can then fine-tune it in the edit instrument page. The first bit of this to look at is on the left and is where you can change the volume and pitch of each drum.

For a complex drum such as the snare you can individually adjust the volume of each element, although as they are very well balanced already you will find yourself mostly adjusting the global level. You can also change the trigger note for each element here.

To the right is the mic section. As you select each kit piece you can then choose which microphone set you are editing. Cymbals have two mic sets, overheads and room, while every other kit piece has three: direct, overhead and room.

Just below where you select the mic set to edit you find the Routing Destination. Here you can decide where each mic set goes. While close mics go to discrete channels in the SSD4 mixer the OH and Ambience mics default to mixed stereo channels.

Below that you can adjust the pitch of each individual mic set and its attack and decay envelope. This enables you to tailor the sound of, say, the room mics without affecting the dry sound.

You'll see that there are also MIDI groove and MIDI mapping options. These are as straightforward and easy to use as the rest of SSD4. You can audition the MIDI grooves directly in the player and when you find one you like just drag and drop into your DAW.

There are only a few of these right now but Slate will add to these as time goes on. As for MIDI mapping it is very simple and you can store your own settings - useful if you need to use it with different controller options.

One of the great features of the Slate sound is that his samples take EQ, compression and other effects extremely well. In putting together the new player the Slate team has been very aware of how their customers want to use it.

While you may be happy to use the internal mixer and stick on some compression and EQ, and with the quality of the samples provided this is easily possible, most of us want to break out the sounds across our DAW mixer.

Launching SSD4 as a multi-output player does just this. Because of the flexible way you can route different mics to different outputs it is possible to do things you never could with a real kit: having different compression and EQ just on the kick and snare ambience to the rest of the kit, sending one kit element through a distortion and so on.

The combinations are endless, so there's plenty of scope for serious sonic mischief.

The mark of a great drum instrument is that it is flexible enough to fit many styles of music, simple enough to work quickly and efficiently and comprehensive enough to really get in there and make your own sound from it.

SSD4 fits all those criteria. After launching it for the first time we were programming a drum track within five minutes having already built our own custom kit, assigned discrete outputs and fiddled with the pitch of a few sounds. We can see why Steven Slate decided to build a dedicated sample engine.

While we love Kontakt, this player suits drums down to the ground. Kits load fast, editing is very straightforward and the library sounds fantastic.

If there's one point worthy of criticism in version 3 it's that it's far more suited to US rock, metal and pop productions than anything else. If you've wanted something quirky you've had to look elsewhere.

SSD4 has a much broader tonal palette and, combined with the ease of getting those individual outputs working, there's a huge amount of scope to tailor sounds to your exact needs. Add to that the option of using your own samples and you have a serious creative tool on your hands. Excellent stuff - we love it.