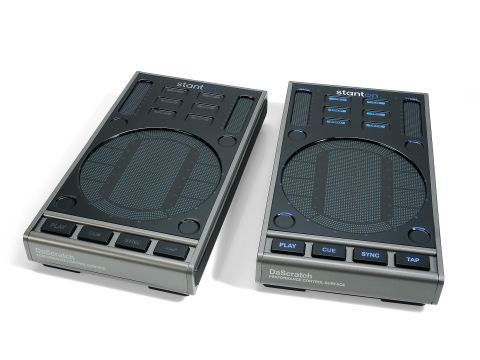 This is one MIDI controller that's too cool to overlook, and if you're a DJ, it's an essential check.

On first encountering DaScratch, we were pleasantly surprised by how compact and lightweight it actually is.

It's around the same size as an old VHS tape, and tips the scales at just over a kilo. It should have no trouble squeezing a ride in your backpack or finding itself a space in the DJ booth.

DaScratch's plastic case features a detachable bottom half, which is used as a cable tidy/storage space. Two finger twist screws keep it in place, and this must be removed to access the USB port to plug it in.

There are several slots to feed the cable through before locking the plate back into place. This should ensure that the cable won't be accidentally yanked out.

The SCS.3d's best software partner is NI's Traktor, for which it has a custom preset loaded and ready to go. Currently, it's compatible with Traktor DJ Studio 3.4 and later, but not the new Traktor Scratch Pro.

All the hard work of mapping the controllers has been done by Stanton, so aside from a couple of bits, you can dive straight into the mix and use it as expected.

The five mode buttons at the top are designed to control EQ, FX, Loop, trigger functions and the highlight - vinyl style scratching. The sixth button enables you to swap the focus between the two virtual decks, so that it's possible to use a single SCS.3d for two-deck mixing.

If you prefer to use a pair of DaScratches, these can be locked together by way of the magnetic strip that runs up the side of the unit.

Each mode changes the way in which the central 'Stantouch' area works with your fingers. For example, in vinyl mode it divides the area in two, with the central strip being a vertical scratch pad, and the outer ring offering circular motion scrubbing and scratching.

Each mode has been perfectly geared up to get the best from the touch surface, and it doubles up as a trigger pad for loops as well as performing the expected fader duties.

Special mention goes to the pitch slider. This offers an 'incremental mode' for more precise adjustments and is very useful.

Serato Scratch Live users can also get in on the action as there is a preset included for them. Since everyone buys SSL for its time-code vinyl control, though, it may come as no surprise to find out that you can't actually scratch it with DaScratch.

The main advantages seem to be in the looping and cueing departments, where all those trigger buttons come in rather handy.

As for the rotary motion of the touch pad, well that can be used to scroll through the crates for tracks at great speed, while tapping gets you in and out of folders and loads and doubles tracks onto either deck.

DaScratch has a little software sidekick helping the cause - this is known as DaRouter. It must be installed and run alongside Traktor etc, and when it boots up, it enables you to select the software preset and also one of the single/dual deck templates.

DaRouter acts like a bridge between hardware and software. It scales and converts the incoming signals before sending them on, and this means that you will need to select DaRouter as the MIDI interface in your host application for it to do its job properly.

The communication is also two-way - feedback from the host software can be used to intelligently control the numerous LEDs, providing accurate readouts and feedback.

We have been told by Stanton that DaRouter is based on Bome's MIDI Translator, and we can expect to see more templates and presets for other audio software in the very near future.

Aside from DJ software, the SCS.3d can be used with any MIDI software that understands CCs and Note On messages. For this purpose, it's not necessary to have DaRouter running in the background unless you especially need the set of control mappings and special scaling tricks as one of the presets.

If you forgo the benefits of DaRouter then you do have to select SCS.3d as the MIDI interface in the host application. As might be expected, DaScratch kicks out Note On messages for trigger operations and MIDI CC data for the slider/fader motions.

The six mode buttons and transport section also send out Note On messages, but most importantly, they change the function and MIDI mappings of the central Stantouch area. So, effectively, this gives us five different sets of messages, each with its own array of trigger pads and fader strips.

Getting set up with Ableton Live is fairly easy using the MIDI learn function, but it does require a bit of concentration to remember how the different modes divide up the Stantouch surface area differently each time.

Once you get used to it, you can be away and happily tapping to trigger clips, switch effects on and off and slide their parameters in the mix. DaScratch does excel as an effects controller, and the ability to send multiple messages on the touch surface simultaneously is very cool. It enables you to get creative in different ways to a regular knobby box.

Even though the trigger buttons might suggest that they are ideal for launching clips, we found that the SCS.3d's layout is a bit too different from Ableton Live's grid arrangement to make this easy.

DaScratch is undeniably a great deal of fun when compared to regular MIDI controllers. Its layout is a bit too specialised for it to be an all rounder, but since it's so light and compact, it's the perfect addition to a live setup and will complement a square box of knobs.

It's a real pleasure to use and really makes it hard to justify using anything else in this price range.

The only thing DaScratch doesn't offer is a crossfader. If it had a dedicated strip for this, it would be a complete solution for in-the-box DJs, as all other mixer functions - such as EQ, effects, gains etc - are well taken care of.